The Bottle is Banished!

Zack's made a lot of progress in overcoming his little drinking problem.  It hasn't been easy.  He's had a few setbacks, but he never fell completely off the wagon.

He's eaten a couple of quarts of applesauce, drank a few cups of bathwater, and discovered that if he dips his monkey toy under the running faucet he can lick the water off it. 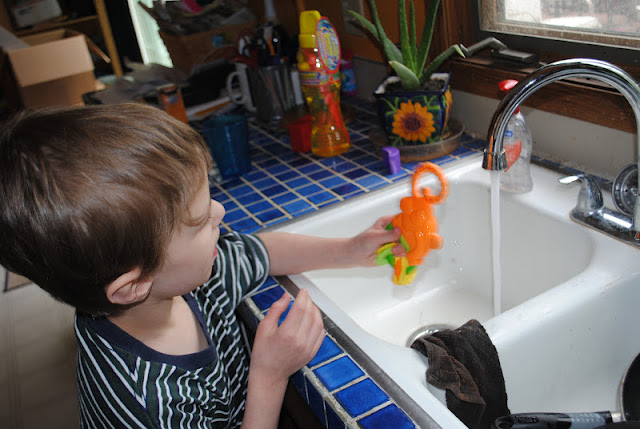 Saturday and Sunday night, Mark sat with Zack for over an hour, prompting and encouraging and cajoling him into drinking from the sippy cup.  Over and over and over, Zack raised it to his lips and pretended to suck on it.  And after awhile, he wasn't pretending anymore.  He drank just a few tablespoons of juice out of the sippy cup and we were ecstatic.  I emailed his teacher and told him to work him today.

And today after school, Zack came home and picked up his sippy cup of milk, and with just a tiny bit of encouragement from me, drank the WHOLE DARN THING!

Then he ate some more applesauce.

A couple of hours later, he picked up a sippy cup of juice and again, drank it all.  Followed by another halfhearted request for applesauce.

The war is nearly over.  And we've won.  All of us.  Zack too.  Bottles will never be in this house again!  (Unless, you know, a friend with a baby visits.)