We are now the proud parents of a 7-year-old!

One of the birthday presents she got was one of those little square weaving looms that makes potholders.  At least we used them for potholders when I made them as a kid.  I think they are too small and I wouldn't use them now.  I didn't know if she'd be into it, I almost didn't get it, because I figured "I used to do this when I was a kid" probably wasn't a tremendous selling point.  Might just make it sound old-fashioned.  Apparently she doesn't think that, because she loved it.  Aliza says it's a blanket for her American Girl dolls. 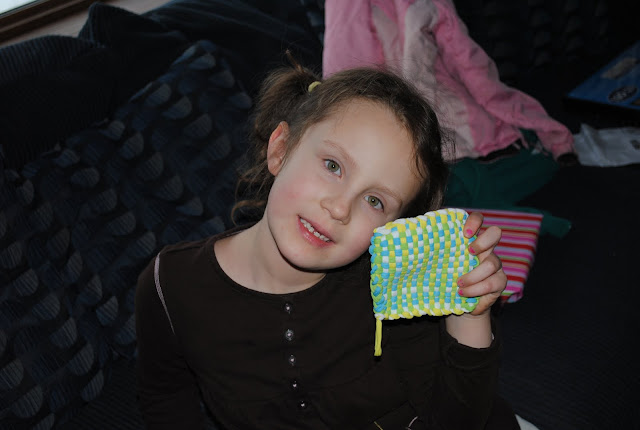 Other presents she received:  a little MP3 player; an art case with a ton of crayons, markers, paints, and colored pencils; Bendy Stix; and a Password Journal.  She entered a password and then proceeded to tell all of us, including Ellie, the little girl next door, that her password is "ellie".  So I guess either there are no big secrets in there, or she doesn't get the concept and purpose of a password.
Her birthday party is Sunday, so that'll take over the weekend with cleaning and preparation.
I thought yesterday I should have had the boys "pick out" a present for their sister for her birthday.  But she's old enough now that she would have known I orchestrated the whole thing.  I do think she will pick out presents for them, though, for their birthday next month.