When Halloween met Winter -- Blizzard of 1991 and other Updates 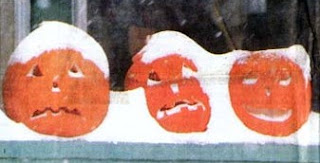 Way way back in the day, when I was working nine to five (what a way to make a living!), three coworkers and I were discussing the Halloween Blizzard of 1991.

One of us was recently married at the time, and didn't go out that night.  She remembers having a bowlful of candy and only three hardy, snow-covered trick-or-treaters.

Another of us was in college that year, and went to a Halloween party.  She remembers driving through the snowstorm to get to and from the party and it was treacherous, but it certainly didn't stop her from going.

A third of us took her two small children trick or treating that night, with warm coats and snow pants worn under their costumes.  They weren't happy about it, but there was really no choice that year.

The fourth of us was a little girl that year, and remembers going trick-or-treating with a coat and snowpants stuffed under her costume.  She wasn't happy about it either.

I won't tell which one was me, you'll have to guess.  I just thought it was neat that the four of us were not just in different places geographically, but in different places in our lives in 1991, and in our day-to-day lives we didn't really notice it at all, until we had one of those "where were you when...." moments.

Now you'll have Nine to Five going through your head the rest of the day, won't you?  Come on, sing it with me.

Not much progress to report on Operation no more Nipples.  Other than the fact that he cried and fought it a little less last night than he did the night before.  This morning he tried to climb the dishwasher again to get into the cabinet and make his own bottle.  Hoping to make some good headway this afternoon when his therapists are here to help him through it.  He's so pitiful lately, and even kind of angry.  The other day he got up at 6, his usual time, and came into our bedroom, padding along in his footy jammies in the dark.  He not only closed but then locked the door behind him as he came in and Mark says "uh oh, he's going to beat us up."  He's so funny when he's insanely tired!

You had to have been the college student.

I agree. Not even I was trick or treating in 91.

Thanks for putting that song into my head. it replaced "The more we get together the happier we'll be"

Ah the blizzard. I was at the UofMN driving home on Cedar and CREEPING. My dad worked nights at the Star and Tribune and they paid to have everyone stay in a hotel that night! Mom and I had to snow blow. Good times.

How long did it take to get the streets back to normal? a Week?