All Signs Pointing to OUCH

Zack's ear infection is worse.  The poor kid has been in pain for days.

I don't know this for sure, but I'm guessing that's what the doctor is going to tell us this afternoon.

This morning Zack's therapist came to tell me he was sitting at the table, hitting himself in the head.  She wanted to know if this is normal for him, or what.......and I sighed, because while it's not exactly an everyday occurrence, it isn't totally unusual behavior for him.  And I sighed because it's just the latest mystery to try to unravel.  The mystery of the day.

Zack does tend to bang his head on the headboard of his bed or on the wall at night, often in his sleep.  One of us will go in and move him and usually he stops.  Last night he banged his head on the wall, and was up and awake from around 3 AM to around 5 AM.  He didn't act like he was in pain, he didn't cry, he was just unsettled and restless, and looking back on it now, he probably was hurting.  And come to think of it, he's actually done that two nights in a row. 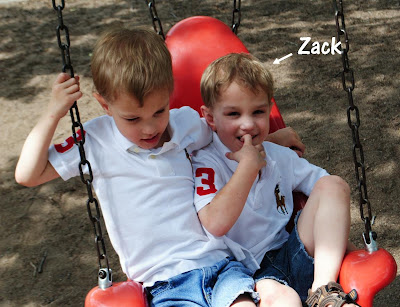 Looking back now it's pretty clear that is what his trouble was, and we just kept trying to force him to lay down and begging him to go back to sleep.  We base the decision on whether to give ibuprofen on the fever status.  Is there one, or isn't there?  There was not, so in our sleep-deprived, brain-fogged states we assumed all was well with him and he was just being a little difficult.  My poor boy!

Yeah, it's horrible when they can't tell you! Add psychic to list of job descriptions.