It's the Most Germiest Time of the Year

Our kids hardly ever get sick.  I'm not trying to brag, I'm just stating the fact.  So it's weird that we've been to see the doctor twice this month.

A couple of weeks ago Aliza woke up in the middle of the night with a sore ear.  She had been coughing for a couple of weeks before that so it makes sense an ear infection would follow.  So off we went to the doctor for an ear check.

I'm anxious not to be one of those moms who runs in to the doctor every time one of the kids sneezes.  I consider it a huge faux pas if I have to hear "all the tests are negative.  It's just a virus, nothing we can do about it."  I hate viruses for their ambiguity and indestructability.  They show, up, dance around your kid's system, causing all sorts of havoc, and there's absolutely nothing you can do but wait until they get tired and die.

It feels like a failure to hear "virus."  Because if I go to the trouble of setting up an appointment and pulling a kid out of school or therapy to see a doctor, I want there to be a bona-fide, clear cut reason for our visit.  Not to mention an antibiotic, or some plan of attack.  "Go home, rest, get lots of fluids"..... I don't need a doctor or a $20 copay to tell me that.  I bring my kid home with my head hanging in shame.

So this is why it feels like a small victory when the cause of the trouble actually is something with a name.

A couple of weeks ago Aliza went to the doctor with one sore ear.  We left with a diagnosis of two infected ears and walking pneumonia.  I held my head high.

(Now I should point out here, she felt fine.  That is, until she heard the doctor say the words "walking pneumonia".  Then she started suffering outwardly.  She slouched and assumed the "I don't feel good" look.)

After this past holiday weekend all the kids seemed fine and I rejoiced, anticipating getting back to our school/therapy/give-mom-a-break routine.  I had my all-the-kids-are-at-school-and-I'm-home-alone party for about a half hour yesterday, until the boys' school called.  AJ had a rash on his left forearm, they wondered if I'd seen it. I had not.

And I always feel bad when one of the kids has a bruise or scratch or mark of some kind I haven't seen, but let's face it, there are three of them, one of me, only about 6 hours of daylight per day right now, and none of the kids are very anxious to undergo full body searches.  So it happens.

But this rash -- it looked kind of bad.  I was surprised they were so casual about it on the phone. 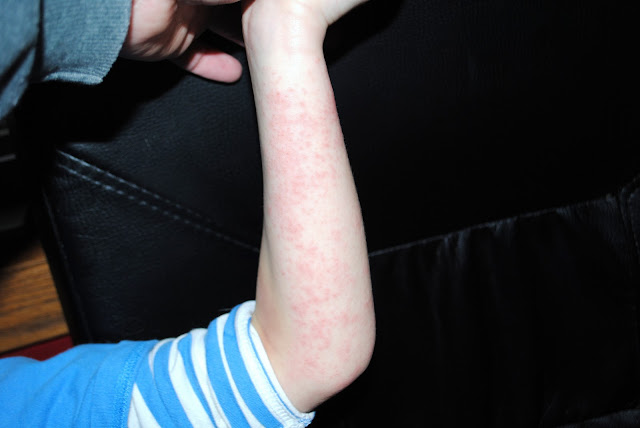 So off we went back to the doctor.  I explained the whole Fragile x-autism situation to the nurse and then again to the doctor, because I'm pretty sure the whole "this-kid-will-fight-an-exam-like-a-rabid-dog" behavior is not listed in his file.  They took it in stride pretty well.

She tested him for strep.  I didn't know a rash could indicate strep, but apparently it's one of the many signs.  He was positive.  Another kid on antibiotics.

The good news -- he feels fine too.  And both of them are loving the sweet, cherry-flavored antibiotics.   Lucky them.

I too hate taking her in and coming out with the "just a virus" diagnosis. We need an at home test to decide if they should go in or not. Glad yours are all on the road to recovery. Be done with illness now for the rest of the winter.

My kids get rashes with Strep throat too... it used to be called scarlet fever... interesting. And about the whole don't tell me it's a virus thing! Totally there on that one!

My kids get rashes with the strep too... it's nasty. I guess it is actually scarlet fever--they just don't call it that any more... and I am totally with you on the "virus" thing.

Surprisingly enough, all 10 of my kids this year and the 12 from last year almost NEVER got sick. They had runny noses every now and then but never a fever or an outward sign of "i don't feel well".Even when parents write to me and say, "Jonny didn't go to sleep until midnight and has been up since 3 AM so he might be sleepy" my kids are NEVER tired. They have more energy than the energizer bunny. Their biggest ailment are seizures which are the scariest things ever. I'd rather have all 10 kids suffering with vomiting and the poops at the same time than to have one student having a seizure. Do your boys have seizures?

They don't as of age 5, nope. thank goodness. We are watching for it though, I know it's a possibility with Fragile X kids.