Doritos - They're Not Just for Breakfast Anymore 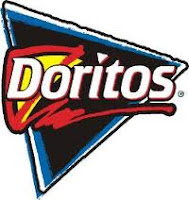 AJ likes Doritos.  And by "like," I mean if the house were on fire and he only had time to grab one thing, he'd have a bag of Doritos in hand.  When other people go to the store to get "just the staples" they're talking about milk, bread and eggs.  Our staples are milk, bread, and Doritos.
When AJ gets up in the morning and I ask him if he wants his milk, he says simply "chips?"

His fingers and lips are permanently orange tinted, along with most anything he touches.

Yesterday while the boys and I were hanging out in the lobby at church (because they were just making too much of a commotion to be in church), an older gentleman came in carrying a newspaper and a bag from Walgreens.  He went over to the table where AJ was sitting and said "hey" and offered AJ a fist bump.

AJ doesn't really get fist bumps, so he high-fived the guy's fist and said "hi" after I prompted him.

The guy sits down, spreads out his newspaper, while AJ watches him.  Then he pulls a bag of Doritos out of the Walgreens bag.  I was behind AJ but I swear I could see the glow that crossed the table, when his eyes lit up.

He turned and looked to see if I was watching, and then he got up and sidled over toward the guy.

The gentleman ate his Doritos and read his newspaper, oblivious to AJ's attention.  He was sort of holding the bag in his lap, halfway under the table.

AJ leaned over in his chair to look under the table at the bag the guy seemed to be almost hidng.

Two more times he got up and sneaked his way around the table toward the man.

We had snacks, but no Doritos. I offered AJ some Honeycomb, which he accepted and ate, staring intently at the guy across the table.