A few weeks ago I ambitiously signed up all three kids for Vacation Bible School at the church down the street.  I thought, the boys might have to stand in a corner and take breaks, but that's okay, it'll be great!  Today was the first day.

How did it go?

Well, it depends on who you ask.  One of their therapists, Tonya, came along to help, and she thought they did great.  VBS is 3 hours long and they managed to stay for an hour and 15 minutes.

I had much higher expectations.

It starts out with opening songs and skits in the main church sanctuary.  The boys started out sitting in the pew right behind their class, then we moved to the very last pew in the back, and finally had to leave entirely and go hang around outside a bit.  After the opening session the classes broke up and the boys' class went outside to the parking lot to do some running-around activities.  We tried just standing close to their group and watching, but even that got too exciting after a few minutes.

There is a pretty little picnic area outside the church and next to the parking lot with benches and chairs and a gazebo, and that became our "happy place."  It was where we went whenever we just couldn't stay with the kids anymore.

I had visions of me helping them make some of the crafty things and them at least sitting through the songs.  There was none of that.

When we got home, AJ gave Zack some much needed sensory input. 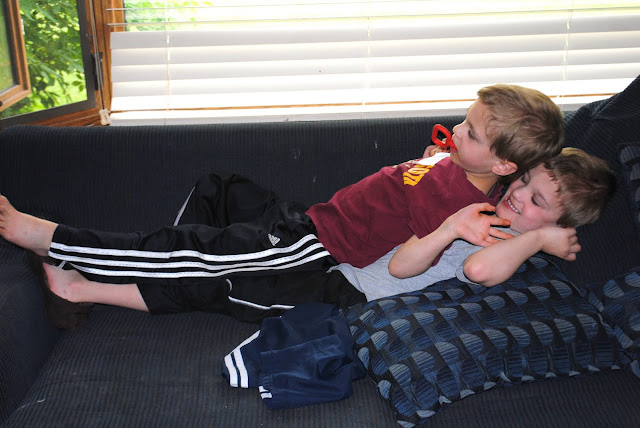 Were my expectations too high?  A social experience like this is making me think twice about trying to get them to be in the regular classroom next fall.  They just didn't handle it all that well.  At one point Zack started gagging so badly, I thought he was going to throw up.  I know that happens with a lot of Fragile X kids, but these guys have never been big thrower-uppers.

Is it too much to expect them to be able to at least be in a room with a bunch of kids -- even if we have to be in the back row?  I know what Temple Grandin would say.  She'd say we should go for it.  But she wasn't there.  She didn't see both boys reaching out to pinch their little classmates.  She didn't see Zack gagging.  AJ nearly bit his chewy in two.  Sigh.......

VBS is every morning this week.  We'll just take it day by day, I guess.

In the words of Mr. Slinger, "Today was a difficult day. Tomorrow will be better." - from Lilly's Purple Plastic Purse.