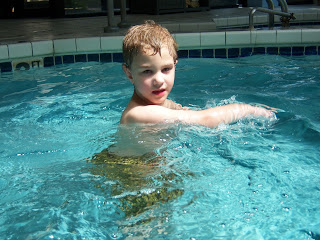 We went swimming at the YMCA yesterday with the kids. We do that almost every Sunday, and the kids know it, so most of the afternoon AJ had been asking "swimming?"

Within minutes of our arrival, throwing ourselves joyfully into the water, there was a little boy hovering around us, tossing around a little floating water ball. I could tell he was wondering whether he could get any of our kids to play with him. He was really checking them out.

When he was within a foot of Zack he said to him "hey, want to play catch?"

Zack was in water up to mid-chest, splashing with his hands and watching them intently. He stopped, glanced up for a second at the kid and went right back to splashing.  (Sigh.... I know.  How autistic of him.)

I was right there too, of course, within reach of my little pincher and biter and I told the kid "he doesn't talk much and I don't know if he knows how to play catch, but you know who you could ask? That girl over there." I pointed at Aliza.

Aliza said no, but the kid was persistent. He continued to circle us and follow us around, and eventually he just chucked the ball over to AJ. I guess he figured, he'd give it a shot. You had to appreciate his spunk. 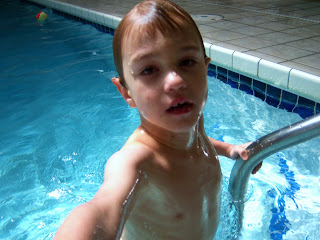 AJ was tickled, but has no idea how to play catch. Well, that's not exactly true.  They have both worked on that in therapy and at school. (And I'm compelled here to mention how I am constantly in awe of how hard it is for them to play.)  But playing catch in a swimming pool is a whole different thing.

So I helped him. I held the ball in AJ's hand, and we held our hands up and counted (well, I held his hand and counted) "1, 2, 3!" And threw the ball back to the kid.  AJ laughed and laughed.

"Not really, no." I said.  I didn't want to explain too much.  Partly because the more I explain, the more it alienates and separates the boys from other kids.  And partly because I just didn't feel like it.

And AJ played catch (well, AJ and I played catch) with the kid for quite a few minutes.  The kid didn't think it was weird that I totally had to make AJ do it, or if he did, he didn't say.  And he didn't swim away from us.  He kept throwing that ball.   Sometimes to AJ or Zack, sometimes to Aliza, and often to me or Mark, but he was quite determined that one way or another, he was going to get a game of catch out of the deal.

Once or twice the ball landed outside the pool.  The kid's mom was watching from the sidelines and she threw it back in one time, right to AJ, and he took it and smiled and waved at her.  And I smiled too.  Because just for that second he looked and acted so ...  normal.