Every now and then I rebel against accepting Fragile X Syndrome's place in our lives, and decide I want to do something that other families do all the time. Once in awhile it's nice to feel something resembling normal.

I just read a fantastic book, January First by Michael Scofield, and in it they try to go on a family picnic. A totally typical family summer outing, made difficult by the fact their six-year-old daughter has schizophrenia and her behavior is often violent and unpredictable. But, as the author explains and I really related to, sometimes you just want to do SOMETHING that normal families do. Just. One. Thing. It didn't go well for the Scofields, and I have many memories of our own family outings that ended similarly.

Regular families go to parades, and Aliza, being a regular kid, loves parades. The noisy fire trucks and booming marching bands, the summer heat and the crowds of people - it's an American tradition, and at the same time, sort of a nightmare for two little boys with Fragile X. We constantly battle between protecting the boys from things that will be difficult and outright painful for them, and encouraging them to leave their tiny, limited comfort zones and have new experiences.

It's a fine, fine line, people.

My friend's daughter Elle was in a parade yesterday with her dance group. Just like Aliza was last September, and will be again two weeks from now. And watching Elle yesterday and  Aliza next month, participate in a parade is something I really hoped the boys could manage. 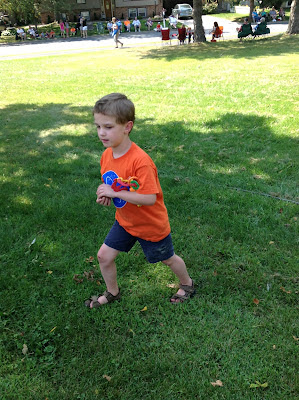 While a big crowd is always a challenge for them, being outdoors helps a lot. The boys almost always do better with outside activities, as long as it's not too hot. There's really no way to minimize the noise since they have been unwilling to wear headphones, but Zack manages just fine - he shoves an index finger into each ear. He sits like that sometimes even when there's no real noise. I think he likes how it feels.

And I figured, AJ handles noise and crowds better than Zack does, so if we can get Zack through it, we're probably 75% of the way toward success.

So at the parade yesterday, every time something loud came by, I put my hands over AJ's ears. The first few times he let me, and then he stopped me. I guess the noise wasn't bugging him that much.

Both boys sat through most of the parade. Zack stared at the iPad in his lap the entire time, but he tolerated the parade for around two hours. And AJ even seemed to enjoy bits and pieces of it.

Now of course, they weren't up at the curb with all the other children, racing out to snatch up the candy the paraders tossed their way. They don't have any interest in candy (a blessing, really, considering their aversion to brushing their teeth).  But they stayed, relatively willingly, in the vicinity of our lawn chairs and even watched a few of the parade floats and this go by (well, AJ did).

For awhile, it resembled normal.  Which is good, because in two weeks we're going to try it again for the Burnsville Fire Muster parade.