Every weekend, I try to get a blog post together to post on Monday morning.  This past weekend, it didn't quite happen.  Instead, I'm going to publish this post with a few funny kid moments I've been saving for a rainy day...

1. AJ came in to wake me one morning, saying "mom? mom?" Having had a couple of hours of adventures earlier in the morning with Zack, I'd slept a little late so he woke me from a deep sleep at 7:30 AM. Having found me asleep, he came over next to me, laid his head down on the bed and fake snored. "Hawwww ssshhhh, hawwww sssshhhhh." 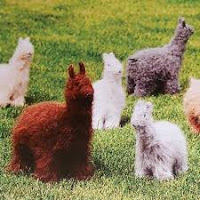 2. Forevermore when I see a llama I will think of the time when the boys were 2 and Aliza was 4, and we were driving back home from the ranch where we took the boys horseback riding, and we passed a farm that raised those long-haired, big fluffy llamas. And little Aliza looked out the window and said "wow, those are some biiiig chickens!"

3. Remember AJ loving his new train in the bathtub? On this night he held the train up in the air again shouting "a train, a train!" and then he tried to hand it over to Zack and said "you say it."  Zack just smiled, he wouldn't be coerced into talking that easily!

Email ThisBlogThis!Share to TwitterShare to FacebookShare to Pinterest
Labels: funniest, playing with toys