The Shocking End of the Drug Trial

It's a sad day in the Fragile X world today.

Yesterday afternoon, I saw something on Facebook.  Something that shook me to my core.   So I did what any normal person does when shaken to their core.

I called my parents.

Later I got an email from the doctor, confirming the news I'd read online.

"Seaside Therapeutics has terminated the extension study for arbaclofen (STX209) in which you are currently participating, as of today."

And even though we were warned this could happen, I am shocked.   We've been in this study for 21 months now.  A lot of families I know have been on the medication for years.  I knew it could happen, but I really believed it would not.

Terminate.  What a terrible word.  Once when I was in high school and an early, inexperienced driver, I had to come up to the Twin Cities to pick up my mom at the airport.  It was easy to drive down the highway and follow the signs to the airport itself, but when I got closer, suddenly the choices weren't as obvious.  I had to decide whether to take an exit to the "TERMINAL" or go back on the highway.  I didn't know for sure what the TERMINAL was, but it didn't sound like a place I wanted to go.  It sounded very bad.  Very bad and very final.  (Okay, I was in high school, maybe I should have known what a terminal was, but I was from a small town and had never driven to the international airport before.  I panicked.)  So I went back to the highway.

This was before the Star Trek technology of cell phones, so my mom had to just stand there and wait and hope I'd figure out how to get there eventually, and I had to figure out for myself that the TERMINAL was actually the airport.

Getting the news yesterday felt a little like when we got the Fragile X diagnosis . I knew the boys were being tested for some genetic abnormalities, but I truly believed that nothing would be found.  Of course they wouldn't find anything, because that's logical, and the logical almost always happens, right?

This is what thinking positively gets you.  Blown away, when the positive thing doesn't work out.

It's hard not to feel like it was all for nothing.  A lot of parents are grieving.  Sad.  Disappointed. Angry.  Heartbroken.  Devastated.  Crushed.  My word was crushed.  Because even though we hadn't experienced the miracles that other families were reporting, the fact that other kids with Fragile X DID show life-alerting responses meant that this drug was hope for us all. 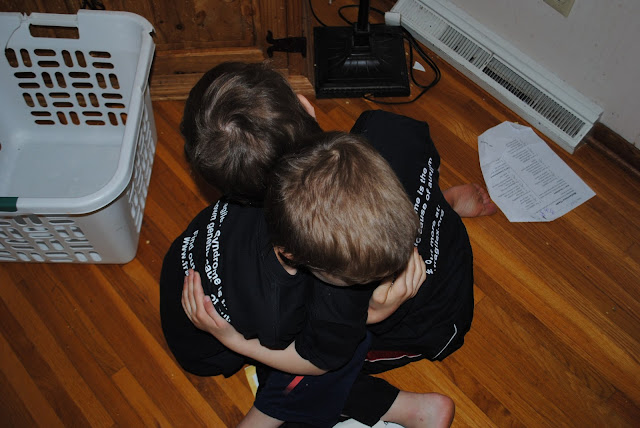 For years now I've been hearing about a cure for Fragile X.  A treatment that eliminates the symptoms.  Hearing that reversing intellectual disability, once something of science fiction, is entirely possible, and within my boys' lifetimes.

This feels like a pinprick into our balloon of hope.  Not just a slow leak.

I know there are other medications being studied that show lots of promise.  I know this was just one of many.  It's just that it takes SO LONG to get a medication approved by the FDA in the US, and this one was SO CLOSE.  And a lifetime is so short, it seems.

A lot of us whose children are in the study keep our families and friends (and ourselves) updated with blogs.  Here are some of the posts others have written about their feelings on the termination of the Arbaclofen study.

Fragile X: One Day at a Time

It's hard to get up and be strong today, and continue the fight.  My spirit feels crushed.  We were given a torchlight of hope with STX209, and yesterday it was ripped from our hands and doused.