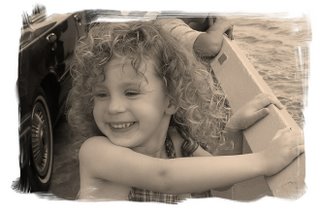 So on our way back from Houston, Aliza took a nap on the plane. No big surprise there, she was beat from 4 fun-filled days, miles of travel, and no naps. She was in such a deep sleep though, that she didn't realize she needed to go potty and she had an accident right there in her carseat. It was a huge accident too -- all over her entire outfit and my mom's sweater which she was laying on, and of course it soaked the seat she was sitting in. I'm apparently brainless because I didn't pack a change of clothes for her at all. She was so good, the entire trip, with going to the potty, and I had spare clothes for her on the way down which she hadn't needed, so I just forgot that I should probably pack something in the carry-on for emergencies. Not a mistake I will make again!
Luckily no one was sitting on the other side of me, on the aisle, so we stripped her, wrapped one of the airplane blankets around her, and she sat in the dry seat and watched Cinderella on the portable DVD player. She was a little too hot though, all wrapped up in the blanket, so she didn't cover herself very well, she sort of let it all hang out. Which wouldn't have been such a big deal, but we were in the last row, right next to the bathroom, so people kept coming back to use the bathroom, walking right past her. Some looked, some didn't, nobody really made a big deal out of it, which was good, because she felt really bad about the whole thing.
So I told her that I wouldn't have any more clothes for her until we got the suitcase, so could she walk through the airport and keep the blanket around her, or did she want me to carry her? She said she could walk. So she walked through the airport holding the blanket around her. Every now and then she'd have to adjust it, so she'd briefly flash everyone as we walked by, but she did very well.
So we got to baggage claim, and waited and waited and waited and waited for our luggage, and finally most everyone has gotten their stuff and left except for us and a couple of other people. One guy says he found his suitcase lined up against a wall, down the hall a ways, and that maybe ours were all there too, but before mom and I could go check, Aliza says "potty". Meaning, I have to go potty, now. So there's a restroom really close, but we get over there and I see that the women's restroom is closed. So I have to run to the other end of baggage claim with my naked kid to get to the potty. She made it, thank goodness. On the way back, we checked those suitcases lined up against the wall, and sure enough, there's mine and my mom's. So I got out Aliza's nightgown and a pull-up (we certainly weren't taking any more chances), and we were finally good to go. We got out of there with no more mishaps, and a pretty good story to tell our friends!