It's a twin thing.

Zack and AJ have their routines when they get to school, I'm told.  AJ greets everyone by name enthusiastically, one by one, and then watches out the classroom window at the other students arriving.  Zack hangs up the backpack and then goes off to his own corner to bounce around and assimilate to the classroom.  He smiles a lot and usually greets the teachers, but none of his classmates.

One day this week, AJ had a dentist appointment so he got to school a little late, and Zack rode the bus and arrived at school without his twin.  And there, he came out of his shell a little.

Each twin has his own personality, obviously, but there often is a dominant twin and a passive twin.  I don't think AJ is in all respects the dominant twin, but he is definitely more personable.   Zack has always been more shy and socially anxious, and perhaps just more inhibited by the autism characteristics.

The last two of their three years of preschool, the twins were in separate classrooms-- both to keep one of them relying on the other too much, and to allow their individual personalities develop.  It worked out really well; Zack was able to blossom in a classroom without his brother, and develop into more of an individual.

Now, in kindergarten, it's not really possible to separate them, as there is only one autism classroom in their elementary school.  So they are back together.

When they were babies, we really thought of Zack as the dominant twin.  Zack was born first, crawled first, and walked first.  He's very determined and strong.  AJ was a much more laid back baby, content to watch his brother pave the way through all the development milestones.  Somewhere along the way, though, AJ's outgoing personality seems to have taken a lead role, and Zack's reluctance in social situations has held him back a bit.

That's why it's so fun to hear that Zack can let his little light shine.  He can totally be outgoing and say hi to the other kids.  And we'll have to try to give him more opportunities to emerge from his more boisterous brother's shadow. 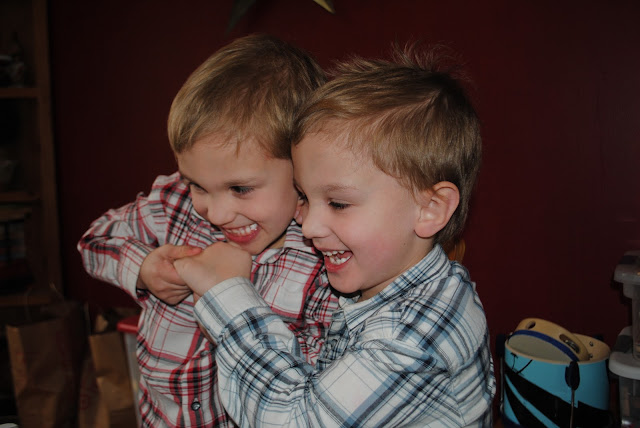 Email ThisBlogThis!Share to TwitterShare to FacebookShare to Pinterest
Labels: school, The Twin Thing

That is so great to hear. I never knew that about twins.

I just love reading your posts. I am home from school sick today and now I miss my kids.

Will you tell us what he did today when his brother returned?

@Twin EnginesThey didn't tell me anything about it today. I assume they returned to their usual roles....

That's really interesting. I've never heard much about twin behavior. I bet that confuses the heck out of people who already have trouble telling them apart!

I did get a reply but it was your question, not your reply from above. Steve is interested but has an erratic work/travel schedule. Send more details, he'd like to meet more MVMOM dads?