.....one-legged man in a butt-kicking contest
.....one-legged cat in a sandbox
.....one-eyed cat watching 9 rat holes
.....set of jumper cables at a family reunion
.....stump full of ants....
but apparently not too busy to make this useless list!

Anyway we've been busy around here lately.  The phone rings off the hook, and to Mark's great delight, it's not always for me!  He has an interview every other day for the next week or so.  It's so great to have some action on that front.

Yesterday I got a tour of the two elementary schools in our district that have autism programs, one of which the Wonder Twins will attend.  In both schools I could see a lot of similarities to the early childhood special education preschool the boys attend now, except that........everything was bigger.  The equipment, the kids, the hallways, the classrooms.  It's all bigger.  Some of those kids were huge.

I didn't see any kids that were as hyper as mine.  They'll shake the place up.

We should know within 1 to 2 weeks which school they'll be at, and then we'll start transition meetings.  This is a very long process which maybe is in direct correlation to how different kindergarten is going to be from preschool.

Today someone from the company that is going to organize our grant money came over to go over that paperwork.  It was about as interesting as that sentence.  That's all I have to say about that.


I'll wrap this up with a couple of photos....here's AJ double-fisting his McNuggets~ 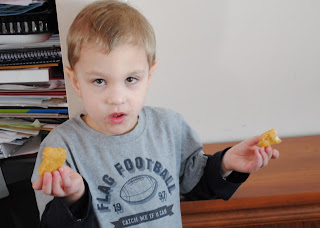 And Aliza wearing the necklace she got from her grandma's cousin, which used to belong to her great great aunt Mercedes~ 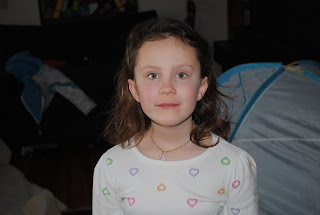 Someday when I have more free time (insert laughing here) I am going to focus more on genealogy.  My goal is to record most of our family history.  This past weekend I got copies of a couple of letters my great great grandmother Flora wrote to her husband Elbert while he was in the Civil War.  I felt a little bad reading them, they are obviously quite personal, but it made me feel like I knew her a little bit too.

My son shakes up his school too! Sooo much energy. It makes things interesting!

Kindergarten does seem bigger than preschool. I never cried when Ian went to elementary school for the very first time. Maybe it was because the program was really a Pre-K. He was in it for 3 years...mom fine all 3. This year, I bawled like a baby when I took him to his kindergarten class. Him? He was movin and shakin his way in....and has had a blast! I guess it's a good thing they don't notice the same thing we moms notice.