I'm not exactly exploding with energy this morning.  This past weekend was the Mothers of Multiples Used Clothing & Equipment sale - which roughly translates into 20 or so hours on my feet over the course of 2 days, and 4 or less hours of sleep in between.  It's a ton of work but it's at least that much fun too.  Here's what it looked like when we were all set up and just waiting for the chaos to begin! 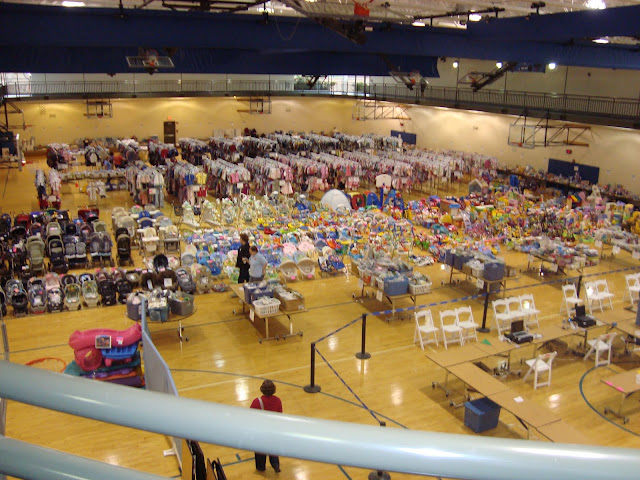 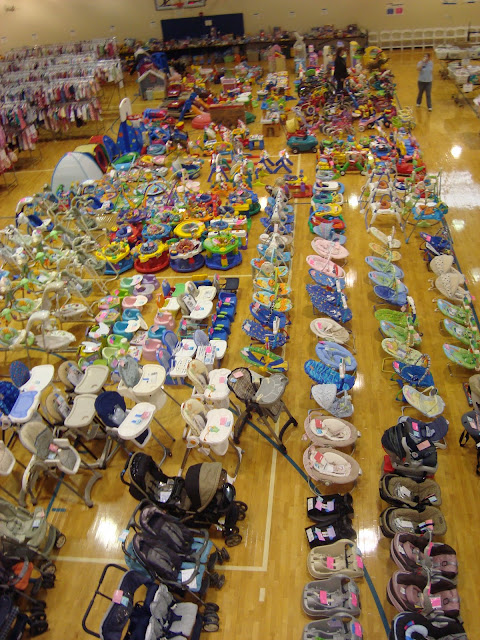 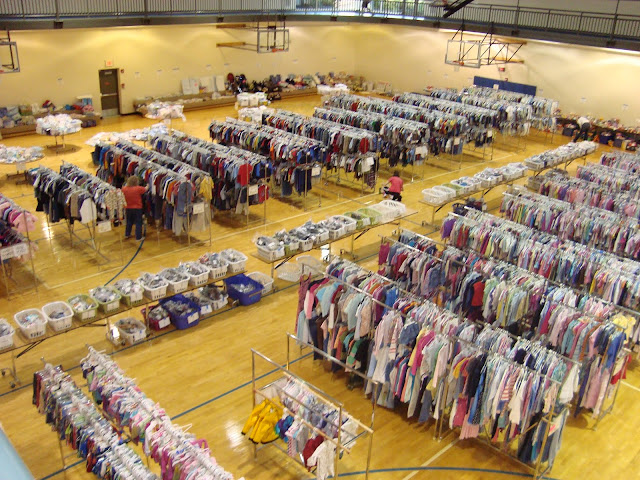 *I "borrowed" these pictures from my fellow twin-mom Alissa's blog.....thanks Alissa!

So anyway, being two days post sale you'd think I might be rested up and prepared to deal with anything my 3 little monkeys might throw at me.  And truthfully I do deal with whatever they throw at me, because I have to, no matter how tired or sore or sick or icky I might feel, it's in the Mom Rules.  Every mom knows it.  But Zack really tested me this morning.

My sons are 5 years old but not potty trained; I should preface by explaining that.  The darling husband and I have developed, among many other amazing skills, the ability to change a diaper on a 5 year old while he stands up and spins around, leans over, wiggles, and tries to run away.  We are quite good at it.  Actually Mark was doing it first, and I watched, scoffing and jeering until I realized there's a lot less bending over and fighting to keep the boy laying on the floor.  I started trying it, and lo and behold, it is actually a little easier to change a diaper on a child that stands up.  You might not believe it but don't knock it until you've tried it.  Come walk a mile in my Crocs.

This morning I started our morning routine diaper change/dressing for the day, and whipped off Zack's diaper without sniffing or checking at all to make sure it was not "full".  Poop fell to the floor.  (I fully admit my own responsibility here, I should have checked before so brazenly removing that diaper.)  And it is astounding and impressive how quickly poop can be spread throughout a room when it's on a 5-year-old's hands and feet.  Within about 12 seconds it was on the hardwood floor, the couch, the rug, and a throw pillow.  The throw pillow was thrown in the trash.  The rest of it I wiped up as well as I was able, and Zack got a fast impromptu bath because his hands, feet and legs were way beyond what a wipe could have cleaned.

Oh and this was all moments before we all needed to get in the car and drive Aliza to school.

So most of the deep cleaning had to wait until we'd returned.  On the bright side, we have a super clean carpet and couch now.

I'm thinking of applying for the word "pooptastic" to be entered officially into Webster's Dictionary for the purpose of describing mornings like this one.

Email ThisBlogThis!Share to TwitterShare to FacebookShare to Pinterest
Labels: poop

OMG! Sounds exciting! I'm with you on changing while standing. That's what I do with our 6 year old, and I"m not sure why I can't get my husband to follow the example....way easier! And the boy actually hold way more still and compliant than when laying down.