A Small Thing, Yet a Big Deal

AJ started doing something new this week.  Yes, this week while he's been sick and not having therapy.  It seems like a small thing now that I sit down to describe it, but it's thrilling to watch him.  It feels like a window opened, a new pathway to communication with him. 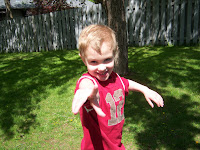 He points at someone now, while saying his/her name.

Last night he wanted me to get out of the computer chair so he could sit there.  I saw him pause and then point at me and say "mom?"  I said "what, honey?  What do you want?"  And he grabbed my left leg around the thigh and started pulling.  I got it immediately -- he wanted the chair!

Later, when it was medicine time, I went toward him with the bowl of pills resting in applesauce, and he giggled and pointed over at Zack who was sitting on daddy's lap, and said at the same time "Zack."  He always wants Zack to go first.

He's been able to say "Zack" and "mom" and dozens of other words, but he says them on command.  Not in ordinary life situations to convey a meaning.  It's sensational, to see him do that.

Way to go! I'm so proud of him! Hope everyone is feeling better at your house soon. After I saw you on Tuesday, things went downhill here, too.