Making Them Into Little Readers

Sometimes I'm a little slow.  The boys have been recognizing words for awhile.  When AJ sees the word Wiggles, he points to it and says "yes".  Zack does the same thing when he sees "Diego".  And they shake their little blonde heads and say "no" when I highlight a show on the computer that they don't want to see.

I just realized what this means.  It means they can be taught to read!  That they actually are already reading.  As an avid reader myself, it's important to me that they are able to read and that they love it.  Aliza reads, although she enjoys torturing me by saying "I don't like to read!"  I beg to differ.  She just has to have the right book.  That's all anyone needs, and then absolutely anyone can become a reader.  I honestly believe that.  I gave my friend Bobbie what I thought would hook drag her into the reading pool; I gave her "The DaVinci Code."  It took her around 18 months to read it.  I give her kudos for finishing it, but clearly she didn't find it a page turner (how could anyone not?).  Then recently, with no help from me, she found "A Child Called It" and she read it in just a few days.  Then she read the sequel.  Then she picked up a book at the library about Mother Theresa.  And now she's a reader! 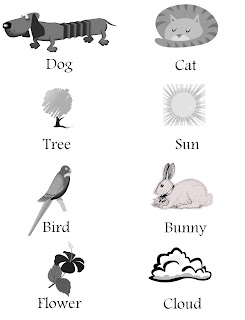 I saw a video of a kid reading from flashcards at the conference, that I mentioned in this post, and I am making flashcards like the ones from the video.  I have around 23 so far, I hope to have 200 by the time I'm done.  Why 200?  Because, again as mentioned in the post before this one, if a child can read 200 words, they are considered officially a "reader."  And wouldn't it be great if they could start kindergarten already recognizing a bunch of words?  Here's what my flashcards look like on one side.  On the opposite side will be just the word, no picture.
One problem is, this method limits me to nouns and verbs.  But, you gotta start somewhere.
If you want them, email me -- I'd be happy to send them to you.  I'm just printing them out on cardstock, cutting them apart, and covering them with clear contact paper.  I priced laminating machines and decided to start with contact paper, and see what my level of commitment is here before investing.  I hope we use them so much they destroy them.....but we'll see!

Very cute picture! Yep, they WILL learn to read...because like you said they already are! I'm guessing you already know the site, but just in case... starfall.com is wonderful! Our older boys can both read, yes, not like young adults their age, but they can read. Kyle's learning was heavy in memorization of words (Edmark), and Matt had a combination of phonics and memorization. Every time I see a commercial for that program that teaches "babies" to read (four our 4 year old), I'm so tempted to look into it, but I'm guessing it's pricey. Have you looked up Dolch words? I think many schools use these lists. Here's a site that I was just checking out http://www.kidzone.ws/dolch/kindergarten.htm
Good luck!

Evan and I have been doing starfall for a couple of years now. We started off with the letters...they each have something after them when you click on them. He can't control the mouse, but he points or tells me where to go. There are so many other good activities. One favorite is in the section: I'm Reading, click on "fiction & nonfiction" and then click on "puzzles."
There's probably a really good chance you already know about this site, but I just wanted to post this just in case. :) Love it!

I have never heard the stat about if you know 200 sight words you can basically read! Encouraging to know as we are working on sight word flashcards at our house too. I love your strategy. Back to positive town.