Zack's a tough guy.  He's not giving in easily.  AJ is worried about all the screaming.  He had his bottle of chocolate milk this morning and hasn't really drank anything the rest of the day.  He keeps picking up the sippy cups and saying "no?" and handing it over to one of us.  With his wide, tear-filled brown eyes.

He tried to climb the dishwasher to reach the cabinet where he knows the bottles are kept.  When he had trouble keeping his footing on the edge of the dishwasher he put a hand on either side of it and tried his mightiest to yank it out from under the counter.  I worried for a few seconds he'd succeed; he is after all, the strongest 5-year-old alive (I proclaimed him that when I put a 40-pound sandbag in the toybox, along with 2 8-pound weights, to keep him from moving it, and he still maneuvered it across the room somehow.  That was back when he was 3, but I'm pretty sure the award would still stand.).  I started to take a picture of him trying to scale the countertop and he came over and screamed at me.

A little later Lily had the nerve to sit on the couch next to him.  He pulled her tail.  She swatted him right back.  He screamed as if he'd been mauled by a lion, rather than merely patted by a 5-pound declawed housecat.  He's a little sensitive right now.

Lily, by the way, has had her own problems this week. 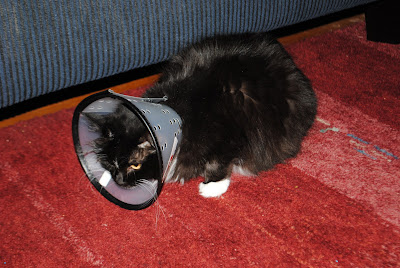 So sorry you had such a rough day. Hopefully everyone, including the cat, will have a better Wednesday.

Hang in there! But, I am glad you can paint a funny picture for us to laugh at in the mean time. :)