27 and Still a Believer

This story recently made the rounds in the Fragile X email group.  It's a sweet tale for the holiday season.


Twenty-seven and Still a Believer

My son, Simon, still believes in Santa Claus. I recently helped him with his annual letter to Santa. This year, he requested a new whoopee cushion, snow boots, nunchuks for his Wii, a six-pack of Budweiser, and Catherine Zeta Jones. It's a weird list. But there’s a reason for the weirdness: Simon, age twenty-seven, has fragile X syndrome and is mentally impaired.

Simon’s mental age is hard to estimate. He can’t read or tell time; math might as well be Sanskrit. If you ask him what day of the week it is, he has to guess. “Saturday?” he’ll say. “Friday?” His speech is garbled and he can be hard to understand. But he’s a savvy guy who never leaves the house without a cool pair of sunglasses and a ball cap, who hangs out with aplomb, who recognizes anyone he has met even once and greets that person with genuine enthusiasm. He is particularly thrilled when he sees someone in a uniform: a police officer, the mail carrier, Santa Claus.

For the past twenty years, Simon has greeted every Santa Claus he has seen with the same chuckling hey-I-know-you approach. This is the pattern: He strides up to the red-suited man with an odd, almost stiff-legged, rolling gait, cracks the biggest smile in the mall, and says, “Hi Santa! Remember me? I’m Simon.” Then, because repetition is at Simon’s very essence, he lists, in a sing-song voice, what gifts he wants, ticking them off, one by one, on his fingertips. He has practiced this routine often. For the past several years, most of what he has wanted has come from electronics stores; he scrutinizes their flyers intently. He studies the newspaper too. In past years he asked Santa to help victims of Hurricane Katrina, the Asian Tsunami, and the earthquake in Haiti.

Because Simon doesn’t have a logical sense of time, he starts bugging me to leave out cookies and carrots for Santa and his reindeer as soon as he sees the first Christmas decoration of the year. “We need to put cookies out,” he’ll say. “Not tonight,” I’ll answer. “Christmas is a long time away.” Then I’ll show him the calendar and touch a pen to all the days. “A long time?” Simon will repeat. “A long time?” And the next night Simon will look at me, lift his eyebrows, as red as his hair, and ask if we can “put out cookies tonight?” 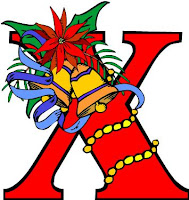 I assume some responsibility for Simon’s anxiety about the holiday. In theory, we shouldn’t celebrate Christmas at all. I’m Jewish. But my parents were agnostics. The family Christmas tree was a celebration of shopping, not Jesus. For the first six years of Simon’s life, when I was married to his father, a Methodist, we continued my family’s tradition of joyful gift-giving. Santa was visited, sat upon, and petitioned. Then I married my current husband, who was raised by observant Jews and could not accept a Christmas tree in the house. I had to assure Simon that tree or no tree, Santa would come. When he was little, we had a tree but no chimney, I pointed out. Then we had a chimney but no tree. Even when we had neither tree nor chimney, Santa came. Simon accepted the logic. Simon also accepted even the most bedraggled Santa, with his obviously fake beard and bleary brown eyes. As he grew older, though, he became more discerning. I had taught him the word “fake” to warn him about television advertising and scary movies. He understood acting and that’s the category into which he placed the inferior Santas. That category also allowed multiple Santas: one inside the mall, one outside the grocery store, one smoking behind the restaurant. If I asked, Simon told me where the real Santa was. “The North Pole, duh,” he said.

In some ways, Simon is a typical twenty-something. He stays up late; sleeps late. He’s had this pattern for years. So to perpetuate the myth of Santa I have to set my alarm for 3 a.m. on Christmas morning. I climb out of my warm bed and retrieve presents from their hiding places. I stuff the huge, stretchy stockings that my mother knitted, eat the cookies and carrots, dump the milk in the sink, run water to remove that evidence, and climb back into bed. Every year when that alarm rings, I question my sanity, my qualifications to mother this challenging child. Should I tell Simon the truth? Lying makes me uncomfortable. In fact, I pride myself on my honesty. I remember an argument I had years ago with my older son, Sam. “I have never lied to you!” I cried. “Santa Claus, tooth fairy, Easter bunny,” Sam said. “I rest my case.”

I know Simon has heard people say that Santa Claus is not real. One year we were at an event attended entirely by adults and someone made a loud, snide comment about a fictitious Santa. I glanced across the room at Simon. He usually avoids eye contact. But he met my gaze, shook his head. We know better, he seemed to say. And he settled, smug, in his chair.

I think appreciating this story necessitates a level of acceptance of the boys' condition that I have yet to arrive at.

Since their diagnosis four years ago, I've slowly become aware of the need for acceptance.  Every parent needs to accept their children as they are.  Naturally, it's pretty easy to accept Aliza as she is, knowing that she will grow up to BE Santa one day for her own children.  Accepting the fact that my boys most likely won't reach that level of mental maturity is not something I've been able to do.

There's a documentary called Living with Fragile X that tells the story several families living with Fragile X, including a set of identical twins.  It's a fantastic show, I've petitioned PBS to show it several times, and will keep trying until they broadcast it. 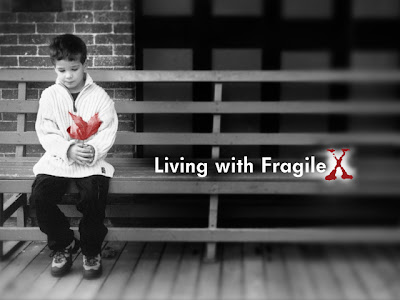 One of the mothers of a Fragile X son who is profiled in the film says this about her son:

"I wanted him to be normal.  And if I have any regrets, it's that I did not let myself love him at that moment.  Just say 'I love you just the way you are.'  And I hope he forgives me for ever thinking I wanted him to be different."

Her voice wavers as she says this and it stabs in the heart me every time I see it (click on the link above and watch the 2-minute trailer to see this mother and her son), because I know, I'm her.  I have not accepted Zack and AJ as they are.  I want them to be different.  I admit it.  I know it's awful.  But I can't help it.  I wish they were different.

I like to tell myself that I want them to be different for their own good; I want them to be less anxious and less impulsive and sleep better.  I think they'd be happier if they had a greater variety of interests and could communicate better.  Could go to our neighborhood school and be in that kindergarten class.  Go outside with their sister and play in the snow with the kids on our street.  I think all these things would really enrich their lives.

But it isn't just for them.  I want them to be different because I want normal kids.  Just like the mother in the video.  I don't want to regret thinking this way, when they are adults.  But I don't know how to just turn that feeling off.

I don't know Nancy Abrams personally, but I emailed her and she gave me permission to reprint this here.  Thank you Nancy, for sharing this story and for showing me where I need to go to accept and love my boys as they are.  I have a long way to go, but I'm on my way.

Thank you for sharing the beautiful original post, and for being so open in sharing your thoughts about it. I can definitely relate to a lot of what you say.

That moment in the video gets me, too! I, also, spent so much time wanting them to be "normal," which is I think it's safe to say most of us with children with special needs have. Has it gotten better now that they're older? Of course, but it's still there; I'm guessing it never completely goes away. And yes, Kyle, 19, still believes in Santa, and his list is also quite interesting....such a mixture of Christmas desires! ;-)

I think when parenting little kids, whether they're facing challenges or not, it's really difficult to think of what they'll be and do when they're 27. I had a great opportunity to talk with a mom of a 30-something son with multiple disabilities. She said that when he was little she could never imagine him having a job, she was so hung up on the fact that he'd never be able to drive a car. Now he uses public transportation and works. He even has a girlfriend.

None of us knows what the future will hold. We just have to take it one day at a time.

And I disagree that Santa is a lie, but that's a matter for a much longer comment!

I praise you for your honesty. I think it must be hard to even admit those feelings to yourself never mind admitting them out loud. II will admit then I look at my students some days and think of what they would have been had they been typical kids. It breaks my heart as their teacher and I can only imagine that the feelings I have are intensified 100% for parents. I'm going to look up that movie and see ii I can get it anywhere so I can watch it too.