How do you play with that?

Who has to be taught how to play?  Who ever heard of such a thing?  It absolutely boggles my mind.  Like pigs flying.  How does anyone not just.....know?

And it is, of course, enormously important for kids to play.  Developmentally important.

I mean, everyone has to be taught how to play games.  You need to know the rules, who the other players are, and the objective.  Nobody is expected to pick up Stratego and start to play it right off the bat, without any instructions. 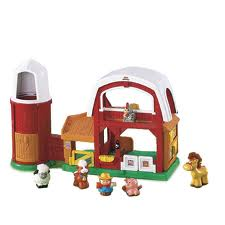 But if you reach into a toybox and pull out a toy car, you know how to push it and say "vroom, vroom," right?  Isn't that just human nature?  If I hand you a toy microphone, you know to hold it to your mouth and pretend to sing.  If you see a big pile of blocks, you might start stacking them.  Maybe you'll even build a tower.

We spend a great deal of time trying to teach the boys how to play like typical kids.

They learned quickly to like books, probably because they are so much like movies.  Pictures, words, stories ...... a definite beginning and a definite end.  All books follow that format so they have a great element of routine to them.

The boys are great with small puzzles, too.  I mean the little wooden puzzles, with around 10 pieces.  Those, again, have a very definite beginning and end.  You know when you are done.  There's a very clear path to follow to play with puzzles.  The rules are always the same.

But when playing with cars, or trains, or, say, a Little People farm set, there's no definite beginning and end.  The playing isn't done until the player decides it is.

The boys have had to be taught systematically how to play with toys like the Little People farm -- the chicken goes in the roost, the cow goes in the field, the farmer closes the door behind him.  They have to be shown over and over how to play with it, and then on their own, they go through those exact motions.  Every time we get the Little People Farm out and tell them to play, they will play just as they've been taught to.  Chicken goes in the roost, cow goes in the field, farmer closes the door behind him.  Then they look up expectantly, waiting for me to tell them they did a good job playing.

They have had to be taught how to put together a train track.  Make a train go around the track.  Put people on it.  To say "choo choo."

They have to be shown how to press the keys on the little Wiggles keyboard.  They've got no idea what to do with our toy Captain Feathersword sword.  (It plays songs when you wave it around.)

They will touch Play Doh (that in itself is quite an accomplishment) but don't know how to squish it between their fingers, roll it into a ball, or flatten it like pancake, unless I show them and make them do it.  With reinforcers (the promise of a Dora or Wiggles video).

We have to set a timer so they know how long to play with the Thomas Train set.  Both boys know how to set a timer and play with an object until the timer goes off.  Zack will glance over at the timer every few seconds to see how much longer he has to play.

AJ gets into it a little, playing with his toys.  If I he does it enough times.  Zack is consistently only "playing" to please me.   He couldn't care less.

I'm mystified.  I'm at a complete loss.  Why aren't they at least enjoying the toys based on the Wiggles and Dora and Diego?  Why don't they like play-acting the movies they watch, at least?  You'd think that wouldn't require much imagination.

Is that what this is -- a lack of imagination?  This absence of pretend play?  Seems like people are more often accused of having an overactive imagination, than the other way around.  I can't wrap my head around it.  You might say I can't imagine it.  Ba-dum-bum!

I'm so jealous when I see other people's Fragile X kids playing with toys.  Really, really playing, and having typical-kid fun.

We take so much learning for granted; the fact that we recognize the emotions people are feeling  by the expressions on their faces; knowing that when someone nods their head up and down, they mean "yes."  We know that the proper and usually accepted response to "how are you?"  Is to say "Fine, how are you?"  We assume everyone knows that pants go on the legs, not the arms.

I think most moms and dads take for granted that their little kid is going to know how to put a toy car in his hand, run it across the floor, and say "vroom," and follow a train around a track and say "choo choo."  I know I certainly never dreamed I'd have kids who didn't know how to do that.

Email ThisBlogThis!Share to TwitterShare to FacebookShare to Pinterest
Labels: playing with toys