We discovered something important this morning.  Zack is not allergic to penicillin. 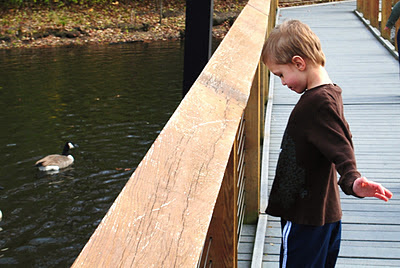 He's got strep for the second time in two weeks.  Four days after finishing up the first antibiotic, he spiked a fever again, and one of the gooiest noses I've ever seen.  He walked around with the "sick" look.  You know - eyes half closed, mouth hanging open.  He didn't have much of an appetite, and that's not like him.  He was sleeping in every morning and that is definitely not like him.

So he took a trip to urgent care this morning, because tomorrow morning we leave for our fourth trip to Chicago and I knew if he needed to be back on some antibiotics, he'd better get started or this would be a miserable trip.

So since he was having his second bout of Strep in two weeks and had just gotten off an antibiotic that apparently didn't do its job, the urgent care doctor decided to give him a shot of penicillin.

Good grief, these kids have been sick a lot this fall.

I like this idea of getting all the medicine done in one quick shot.  Literally.  Ten days of holding Zack down, twice daily, so I can squirt the "pink" (what he and AJ call amoxycillin) into his mouth has not been pleasant for any of us.

By mid-afternoon today he barely had a fever, and he'd pretty much bounced back.  Literally, he was bouncing.

This penicillin is awesome stuff.  I wonder if I can get them to cure all my kids' ills with a quick shot from now on.