I will never feel justified in complaining about a brief, slight lack of sleep.  Not after surviving the boys' first two years.  I think Mark and I are both permanently brain-damaged from those first two years.

They've been waking up between 4 and 4:30 and coming into our room or each others' rooms.  Then while we try to get them to settle down, they wave their arms around in the air wildly, and talk.  They repeat favorite phrases from their favorite shows, or else just things they hear us say.

(repeat each line 6 times at the top of your voice to get the full effect.)

Complaining that the boys have been waking up before 5 seems petty.  They are sleeping soundly from 8ish until 5, usually. It's just that we had gotten used to them sleeping soundly until 6, or even later.

We're such lightweights now.  One measly hour earlier, and we're all whiny.

I've never been convinced the Melatonin helped them at all, so we cut back and started cutting the 3 milligram tablets in half to give them.  That was maybe around when the pre5 AM rising began  to be consistent.  So back to whole tablets we go.

STX209
We are up to 20 milligrams in the extension program now.  The trial ended in the middle of December and we don't know if they were getting the med or the placebo, but we suspect that Zack, at least, was getting some dosage of it, because his anxiety did improve.  AJ might have improved as far as anxiety is concerned.  But some other behaviors are rampant.

Then again, he might just be acting like an ordinary little boy.  A boy without excuses like autism and Fragile X to blame his behaviors on.

He's been really mischievous lately.  Testing both us and his teachers, to see what he can get away with.

I have to hold boys boths hands tight, when we walk from a store to the car or vice versa.  Because they won't just walk alongside me.  They won't stick by me at all.  They'll wander the parking lot, aimlessly, not watching for cars at all, like a toddler might.

Once we are within a few yards of our car, though (and no moving vehicles were present), I could let go of the boys' hands, and be assured they would run toward our car and get in, such was their enthusiasm for going home.

Lately though, if I let go of AJ's hand, he's more likely to run off in some random direction, looking back at me and laughing as he scuttles away.

At school he'll get up and run off into the hall while they are having circle time.  When an EA brings him back into the room, he sidles up next to his teacher, smiles charmingly and says "Hi, Miss Danielle."  A real little suck-up.

Yesterday in church, though. something happened that made me immediately think the STX209 medication is working.  Or rather, I should say, something didn't happen.

The boys didn't need to be escorted from church.  They didn't bounce around, holler, and generally make such a commotion that one of us had to take them out.  They sat, they looked around, they ate cereal, and they watched "Super Why" on the iPod.

It was the first time ever that they both sat through an entire church service.

Once in awhile Zack would have a little trouble juggling the iPod while he reached up to put fingers in both his ears, when the music got a little loud.  Other than that, no trouble, whatsoever, from either of them.  We were astounded!

Finally, I wanted to mention that Mark went to Aliza's school last week, and was the "mystery reader."  Every so often a parent comes in to read a book to the kids, and Mark decided he wanted to do that.  It was very cute.

Afterward the kids got to ask him some questions of their own.  Here are some of the things the 3rd graders wanted to know. 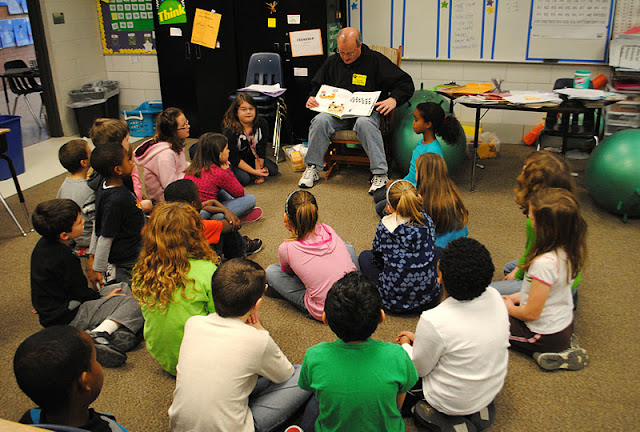 "Grown-ups never understand anything for themselves, and it is tiresome for children to be always and forever explaining things to them."
~Antoine de Saint-Exupery

Congratulations on the victory! I learned of melatonin just before I got pregnant and can't take it. I will be using it again. It's wonderful.