Just a quick note to mention a couple of funny things Zack said this week.  Most of the time my funny-little-boy stories are about AJ.  He is the comedian.

Zack gave him a run for his money this week, though.

One night I was getting the tub ready for Zack to take a bath.  He came in and immediately got naked, because baths are very fun.  He bounced and hopped excitedly around the bathroom while I rinsed out the tub and then he came over and lifted the toilet seat.

(They aren't potty trained even a little bit, but we make stabs at it occasionally.)

I asked him "do you want to sit on the potty?"

He said yes, so I helped him hoist himself up there.  He got right back down less than a second later.  He turned around, reached up to flush with one hand (even though he hadn't done anything worth flushing), and with the other hand he waved into the toilet and said "Bye, pee.  Gracias."

Thank you, Dora the Explorer, for making my boys not only biligual, but very polite!

The second big talking event Zack had was earlier this week.  I was downstairs cleaning up the spots where the cat pooped (because apparently, I don't get to clean up enough poop from these boys every day, the cat thinks I need to be more involved in her bodily functions as well.) 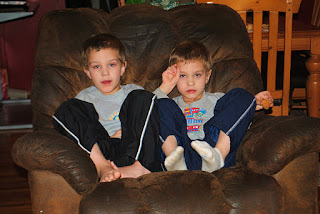 Zack came halfway down the stairs and said "Mom!"

I turned around and said "hi Zack, whatcha doing?"

Zack took in the scene -- me, crouched in front of several icky spots on the carpet with some carpet cleaner and paper towels, and announced ,"Oh, mess.  Bye!"

It was just so unusual to hear a clear, meaningful message from him.

I just had to record these two instances for posterity.

Of course we are wondering whether the extra talking Zack is doing might be a result of the STX209 medication.  Hard to say, but it's definitely a possibility.

Cracking up! But seriously, that is sounding good. That picture of your boys sitting together reminds me so much of my boys. Or maybe it's just the TV stare I'm so very familiar with :-)