Why I'd Never Make It on Dance Moms

See that cute kid in the white t-shirt, second from the right?

That's my baby up on stage, accepting an award with the whole dance team!

They were first in their category (I think it was called Advanced Production), and first overall winners!

They got Double Platinum!

Do you know what this means?  Because I don't.  I'm not down with the dance-award lingo.  Apparently Double Platinum is better than Single Platinum, but not as good as Crystal.  And Gold -- don't get me started.  Gold is crap, apparently.

(See, it's not like the Olympics, where everyone knows it goes Bronze, Silver, and Gold.  Gold is a dance award level, but it's like 3rd or 4th or something.  Tell Aliza you got Gold in dance, and she'll be all "yeah, whatever, that's not very good."  And I think there's a Silver dance level, but not a Bronze.  It's quite complex.)

This was the first of three dance competitions Aliza has this spring.  She was magnificent, graceful, poised, elegant, and very hip.  She had moves like Jagger.  As for my performance as a dance mom - I don't think I'd have even gotten a Gold.

For example, a week ago I'd never heard the phrase "hair donuts," and this weekend I had to do them twice.  A hair donut is a soft, donut-shaped thingy you slip over a ponytail and then wrap the hair around, to make a hair bun look huge.

It sounds simple enough, and I watched a You Tube tutorial so I'd know how to make them, but I had a hard time getting all the hair in nice and tight.  About half the hairs on her head didn't want to cooperate.  One of the teachers was helping me, and then she just sort of took over (and I let her), because I wasn't doing it right.  Fail.

Then there was the fake eyelashes.  Every time I did it, I didn't get the fake ones close enough to the real ones, and she'd open her eyes and have two, distinct levels of eyelashes on her upper lid.  I couldn't get them close enough.  So another, more experienced dance mom helped us with that.

Maybe by the time competition season ends, I'll have these things down, and I'll know what it means when someone gets Crystal.  That's really good, from what I understand. 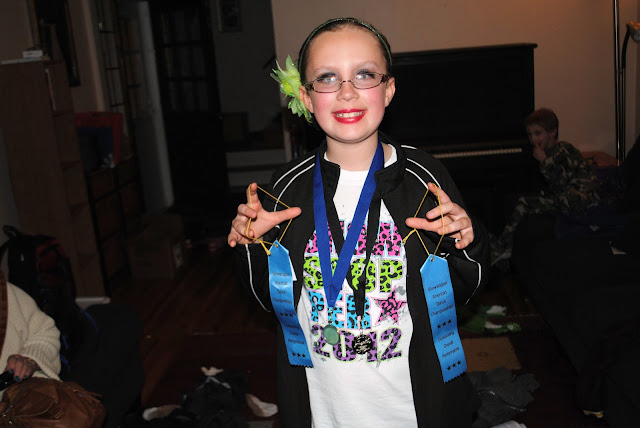 Zack and AJ went to see their sister's dances both on Saturday and on Sunday.  It wasn't their favorite place to be, but they both stayed in the crowded auditorium full of screaming dancers for a very short time, and neither had a meltdown.  That, to us, translates into success.  I do think I'm going to look into getting some noise-cancelling headphones for Zack.  He has his fingers in his ears more and more, it seems.