Eleven years ago today, I was at work, having a typical workday.  I was engaged and planning a wedding for the following January.  I didn't have kids yet.  I didn't know about Fragile X yet.  Life was pretty simple.

When my coworkers and I became aware of the terrorist attacks, most of us went up to the coffee shop and lunchroom to watch the coverage on the big screen TVs there.  I remember being in awe of the fact that all those people in New York had gotten up, showered, and headed off to work that morning, in an office building, same as me.  None of them could have known it was the last time they'd ever do that.  It felt, at the time, like it could have been any of us.  I felt a kinship with those people in the World Trade Center towers, because they just went to work, at ordinary jobs - they weren't policemen or firemen.  They had no idea that going to work could kill them.

We were all in a bit of shock, I think, and nobody could really get any work done.  We chatted quite a bit about it, everyone having an opinion of what had happened, why, how, and what was going to happen next.  We all talked, all day.

I remember standing at one coworker's desk with two others, talking about - I don't know - something about what was happening that day.  And all of a sudden the desk in front of me started rushing to the right.  Everything around me blurred, and spun to the right.  My heart suddenly raced.  My eyes didn't want to focus.  I took a slow breath and looked down at my hands, now holding onto the cubicle wall.  My eyes saw my hands rushing off to the right.  Closing my eyes was worse.  I focused hard on my hands.

Oddly, my biggest worry was that someone would notice that something was wrong with me.  I struggled to act normal, while getting my head and heart under control.  No one was sitting at the guest chair at this desk, so I casually sat down.  Nobody thought it was out of the ordinary.  Almost as quickly as it started, the world stopped spinning.  I continued to focus on breathing and moving slowly and calmly.  It happened a couple more times that day. 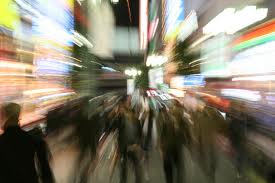 I'm guessing this was a panic or anxiety attack, from everything I've read about such things.  It wasn't the first time this had happened to me.

I think the first one was a few weeks before that..  After having one, for a few days afterward, I constantly feel like I'm on the verge of another one.  I have to focus hard on not getting worked up about anything, and breathing slowly.  I can't let my mind go crazy.  When I start to feel that dizziness of everthing rushing off to the right, I have to look at one, specific, small thing, and focus on the fact that it isn't moving.  It isn't moving, I'm not moving, nothing is moving.  It's happened while I'm in the shower, and in the car on the highway.  It helps if I'm alone, and can lay on the floor for a few minutes and stare at the floor.  And concentrate on the lack of movement.

I haven't had a real one now in years.  I think I've learned how to control it.  I have to be careful to stay calm.  I do some internal counting, and a lot of slow breathing.  Not deep breathing, but s-l-o-w.....

I still notice that I can't turn around in a circle.  If I am walking somewhere and I suddenly remember something I need to go back for, I have to turn somewhat slowly and deliberately.  Just turning around makes me feel a little bit like I'm going to have a dizzy spell.

Anyway, that's what I remember most about that day.  How uncomplicated things were, how I was carrying around that Fragile X gene and had no idea, but was starting to have some of the telltale signs of it - namely, anxiety.