Well, it's been a heck of a week! Here's, how it all went down, briefly:

~ Drove to Chicago Tuesday. Seemed like a longer drive than usual. I wonder if Chicago moved and is now even further away somehow.

~ Went to Rush University Medical Center for our drug trial check up. This was the yearly "long" visit - meaning blood and urine tests, an hour each with a psychologist (the boys, not Mark and I, although I'm fairly sure he and I need psychological help too), the physical exam, and 4 questionnaires. It took hours to get a urine sample from Zack. It took numerous pokes in two arms to get a blood sample from AJ. All in all, a 6-hour appointment. We left dazed and confused, just in time for Chicago rush hour. Good times.

~ Zack acted so strange the next morning. I wasn't positive he was okay, and therefore was so looking forward to the next 8 hours in the car with a kid who gags when I offer him chocolate milk.

~ Zack turned out to be okay. He was just super exhausted to the point of tears. The doctor appointment was really hard on him.

He eats some chicken, enjoys the free wifi at McDonalds, and begins to act more like the kid we know and love. 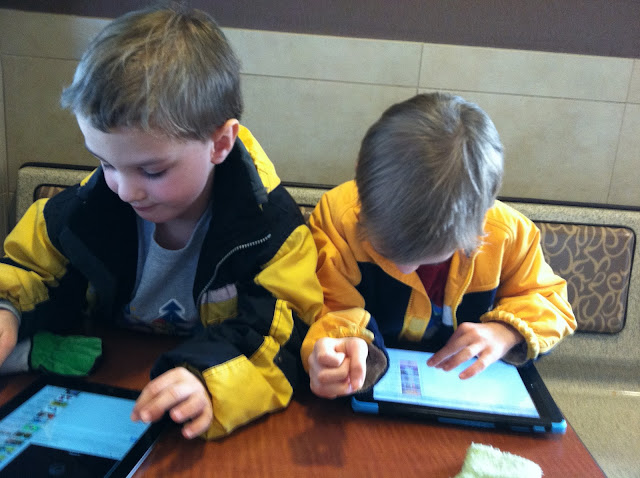 While I'm not convinced they got accurate testing results out of the boys (IQ tests right after stressing them both to the shrieking point with giving blood and urine samples? Come on!), the psychologist did have some interesting things to say. After he was through, he came out to the waiting room to chat with us. He was pointing out on a spreadsheet the different developmental stages, and where he thinks the boys are at. He commented that Zack appeared to be in the midst of the "terrible twos." Zack was wandering around the waiting room, whining and screaming at the time.

I don't know. I think most kids, almost regardless of age, would have complained about the fact that we'd been working to get him to pee in a cup for hours, by then.
He also talked about one part of the tests he'd performed, where he holds up an empty toilet paper roll to one eye and peers through it. He showed us how it's done there in the waiting room.

Then he handed the toilet paper roll to AJ. "You look through it, AJ."

First AJ handed it to me. I handed it back to him. "No, you look through it."

AJ obligingly put the toilet paper roll up to his face, directly between his eyes, and then handed it back to the doctor.

The doctor then explained that this is a good test of the developmental skill of imaginative play. If a kid holds a toilet paper roll up and looks through it, he is showing that he understands how to pretend. If, even after seeing someone else do it, he doesn't put the roll up to one eye and look through it, he doesn't understand really how to pretend. And the psychologist said that this developmental skill is tied to potty training. If a child isn't capable of pretend play, he probably isn't ready to toilet train.

He demonstrated it further by showing the boys a telephone handle - just the ear/mouth piece of one of those old style phones. Not a cordless, and certainly not a cell phone. He pretended to talk on the phone and handed it to Zack. Zack of course was having nothing to do with it. He had had it with all of us. AJ wouldn't do it, either.

I didn't mention that AJ has pretend conversations on our cordless phone all the time. He can talk to real people on the phone, too. He was born in 2005. He probably had no idea what that big, clunky old fashioned phone handle was.

So this past weekend, I happened to use the last paper towel on the roll. I took it in to the living room where AJ was watching You Tube on the iPad. I held it up to my eye. "Look AJ! I see you!"

I handed it over to him. AJ promptly held it up to his ear. "Hello? Um, ok. Goodbye!"

I hear ya all the way from oz. It takes such care to instruct your son that there is nothing left for instructing the Neuro-typicals.