In school, Aliza has to write a letter to us every week.  We have to write back (yep, I get homework in 4th grade).  This past week they had to write about what they are thankful for.  I read her letter tonight and ... well, here it is.  I swear, this is what she wrote, word for word.

I am thankful for a loving family.  I'm also really, really thankful for my brothers with Fragile X because even though they sometimes won't let me have the TV or if Zack pinches me, well, we get to go to parks more often, and I always have someone to play with.  And AJ's really funny when he sings songs, I like "Hold Still" and "Happy Birthday" the best.  Zack sometimes isn't the nicest but he is really a sweet kid most of the time, and they get along most of the time pretty well unless it's fighting over the iPads. 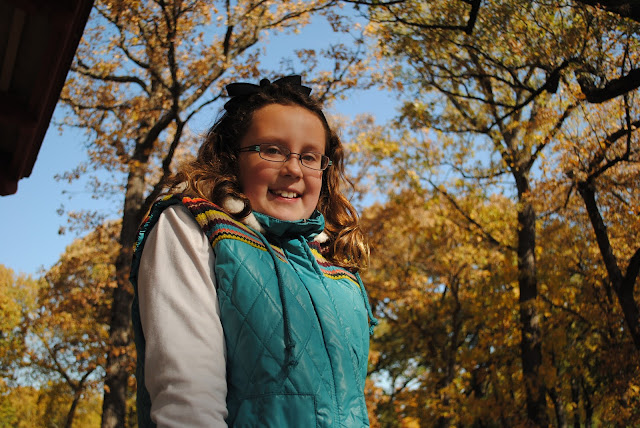 It's so sweet, I almost can't stand it!

It goes without saying that Aliza's relationship with her brothers is unconventional.

Aliza's brothers can't fight with her, the way little brothers would normally fight with a big sister.  They can't switch places on her and pretend to be each other, the way I thought they might, when we first found out we were expecting identical twins.

There are some things they do that typical little brothers do.  They take and break her stuff.  Zack pinches her, and even though she knows that it's a part of his disability to lash out physically, once in a while she gets mad and hits or pinches him back.  I don't get on her case for it too much.  I mean, Zack knows he shouldn't do it, and he needs to learn to control his impulses.  And I'm not going to tell her she has to sit back and just take abuse from him.

Mostly, though, since the boys have limited communication skills, she takes cues from us - mom and dad - in learning how to behave with her brothers.  So she's rather parental toward them.  She praises them when they do something correctly.  She encourages them to hug her, and I've seen her give AJ kisses on the top of his head.  She helps me get their jackets and socks and shoes on them when we're
getting ready to go out.

Yep, it's very, very different from other siblings relationships with each other.  And sometimes that worries me; that she might be missing out on something.  But I know that everyone's growing-up experience is different, and different doesn't mean bad.

And she obviously isn't unhappy about her situation.  She loves her brothers so much.

After I read her letter I asked her if she minded if I wrote about it and posted it on my blog; she didn't hesitate.