We tried something new today.  We went to play at The Works, a children's science and learning play center in Bloomington.  I stacked the deck in our favor as much as I could;

1.  I made sure the boys had had all their morning meds.
2.  I made sure we got there first thing in the morning so it wasn't busy.  We were the first ones in the door and actually had the place to ourselves for the first 8 minutes or so.
3.  I packed the backpack tightly, but keeping things I'd need quickly easily accessible.  Only the backpack - no purse for me.  I needed to keep my hands as free as possible.
4.  I had a talk with Aliza before leaving.  She was in charge of AJ.  If he ran off, I needed her to follow him.  I would have all I could handle with Zack.

For the first 15 minutes it was a breeze; because the boys just did this. 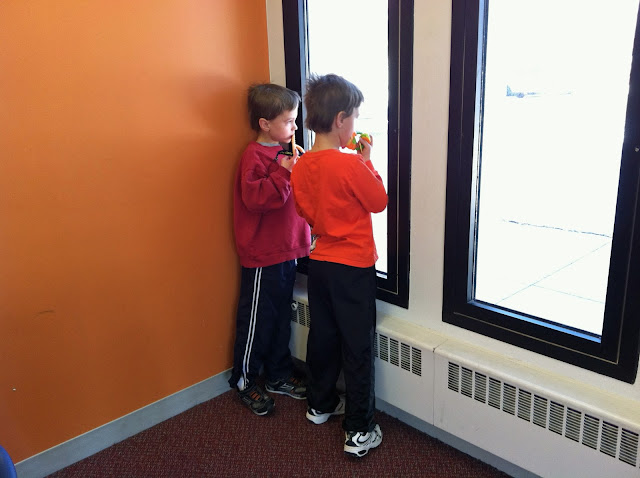 *All photos are overexposed and blurry phone shots, because there's no way I was going to juggle a camera around there while I tried to keep both boys within reach.

But within a few minutes, they decided to help Aliza with the building blocks.  Or, rather, AJ helped a little, while Tyranosaurus Zack destroyed everything she built.

We played that Zack was Wreck it Ralph, and Aliza was Fix it Felix, and we laughed and laughed when Zack would kick over her towers.  I kept trying to get Zack to holler "I'm gonna wreck it!" like Ralph (which he hollers repeatedly throughout the movie, if you haven't seen it) but Zack wasn't humoring us.  He just wanted to wreck stuff.  And because we made it fun and pretended like it was one of her favorite movies, Aliza didn't mind at all that Zack kept destroying everything she tried to build. 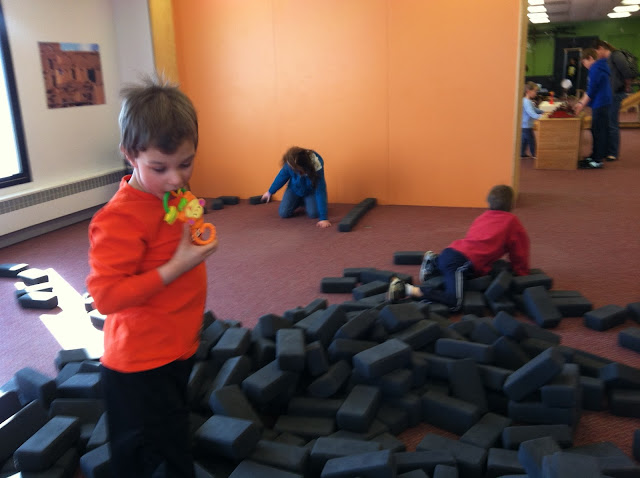 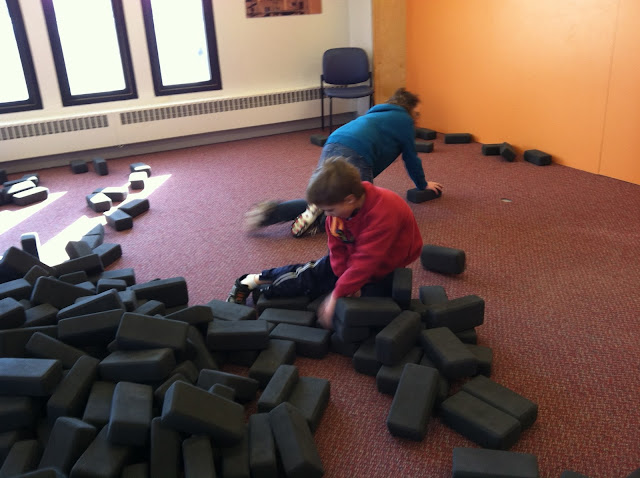 People are forever congratulating me for being brave and bringing the kids to places like this by myself, but I don't think of it that way.  If you tried to stay in the confines of our house with these kids for more than a 24 hour period, you'd see why it's worth the effort to get out and about.  And there are only a few places we can go.

And actually, early in the morning I was having second thoughts.  I started to lose my nerve.  But I knew Aliza would be disappointed if we didn't go, so I figured, what the heck.  Let's see what happens.  And I mentally and physically steeled myself for Zack to roll around on the floor, to try to dash off, to get in other kids' personal space, to wreck other kids buildings and things, and basically rush around like the Tasmanian Devil.  After we'd been there a half hour or so, a couple of boys came in and started working together on a structure of some sort, and I headed Zack off numerous times as he tried to kick over their building.  Finally, one time, he got around me and he knocked down one of their walls.  I told Zack "no" and I apologized to the boys, and they weren't too upset about it.  They had seen him knock over Aliza's structures several times, and from the way he darts around randomly, with his monkey toy hanging out of his mouth, making odd sounds, it's not like at any point they might have been under the impression Zack was an ordinary boy who was just being mean.  I'm sure they recognized autism.

I really, really don't care if people stare, and I dare anyone to make a derogatory comment.  I'm ready to lash out at all times about our right to play in these places as much as anyone else.  Nobody ever says anything, though, probably because I'm so ready for it.  I'm on defense from the moment we walk into a place like this.  I follow Zack like a shadow, and I'm fairly good at grabbing his shirt and keeping him from tearing off or wrecking other kids' stuff.  I make an effort to tell him what proper behavior would be, to redirect, but mostly he's so overstimulated in a place like that, no matter how much I prepare him, that it's all I can do to follow him around and play defense.

It's exhausting, though.  Every mom is alert when out in public with their kids, but in a place like this, I'm hyper vigilant.  I have to be.  I can't drop my guard for even a split second.  I can't sit down.  I can't look at my phone.  I'm ready to pounce on that kid (or AJ even, if he decides to be out of control) at all times.  So our outings tend to be short, for Zack's and my benefit.

I'm not sure what else we'll do during spring break next week, but I won't be sad to send them back to school the week after that, and to go back to work myself and get some rest!