At the Mall of America movie theatre they do a special screening of an older (only a year or so ) movie for kids, for free, on Saturday mornings.  They show it on two theatre screens - one for families, and one they call "sensory friendly."  They leave the lights on and keep the sound down, and it's perfectly okay if you need to wander around the theatre, lay down in the aisle, or shout at your iPad during the movie.

We've gone twice this summer.  The first time they were showing "Rio."  We managed to keep the boys there for close to an hour.  Well, with several walk-around-the-lobby-breaks during which AJ pleaded for "no movie."

The second time we tried it they were showing Disney's African Cats. Not animated and of much less interest to all three kids, but we figured we'd give it a go. 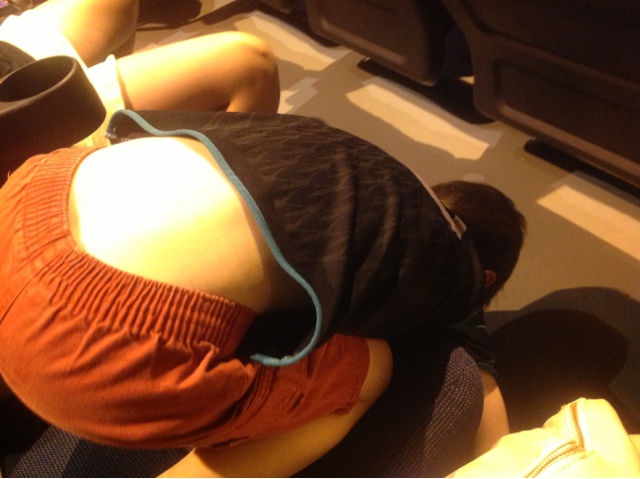 Within a few minutes AJ was pulling my arm, begging to go.  "No lion.  Bye, lion."

(I hear that many kids who've recently weaned off the Arbaclofen trial tend to refuse everything - to say "no" to everything without consideration.  That is certainly my boys.)

I offered him my phone and he quickly found his Yo Gabba Gabba videos, and decided the most comfortable position would be if he put the phone on the floor and leaned over.

Later I guess this got to be a little hard on the back, so he straightened himself out and balanced at around a 45 degree angle, so that his butt was up in the air and his feet dangled up where his head should have been.  I wish I had a shot of that.

I doubt it was the weirdest thing that's ever happened at Sensory Friendly Films.

The first time we went, Zack sat cowering in the stroller the whole time, but this time he sat in a seat with the rest of us.  You know, as long as the iPad was nearby. 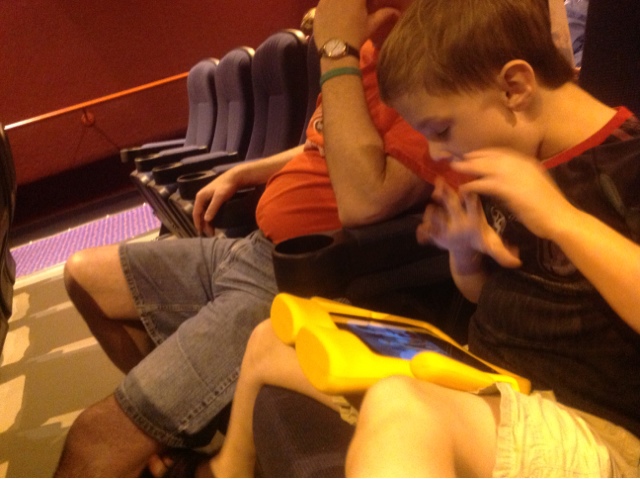 We all went to a movie, for a few minutes anyway, just like a regular family.  It was so awesome.  Before you know it we'll all be eating cotton candy at the State Fair.

I feel like sarcasm doesn't get through here very well.  Let me explain.  We are more likely to each of us grow a second head than we are to eat cotton candy at the State Fair.  I can't take these boys to the State Fair - it's loud, crowded, and unpredictable.  And nobody with their extreme sensory issues is going anywhere near cotton candy.