We were up in the air as to what to do yesterday for the boys' birthday.  They don't know it's their birthday, it's just another day to them.  They are oblivious.  Anything you might normally do for a 5 year old's birthday is just going to feel like a big bother to them.  They don't like cake, they don't like parties, they don't play games.  We really thought we should try to do something they would enjoy though, and make it "their day".  If for no other reason, than because Aliza needed to see that we made the boys' birthday as special as hers was.  So, we thought, what do they love doing?  Among a handful of other things (literally, not more than 5 or so), they do love swimming.  It's the middle of February and we don't belong to the Y anymore; where could we take them?

After brief discussion, we ended up going to The Great Serengeti, in Owatonna.  It was kind of small, but perfect for them.  All three kids had such a fun time. 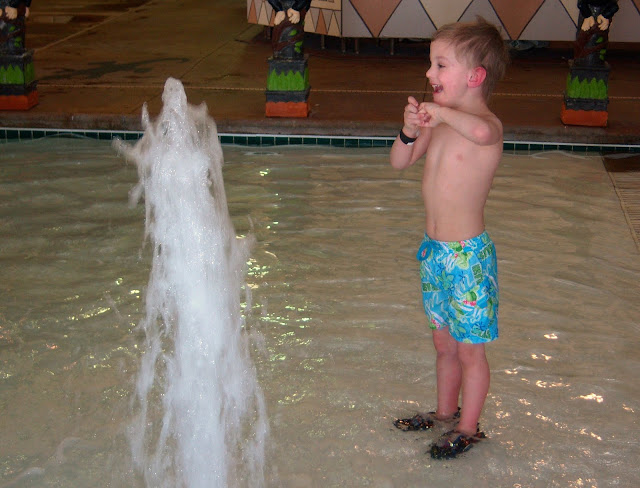 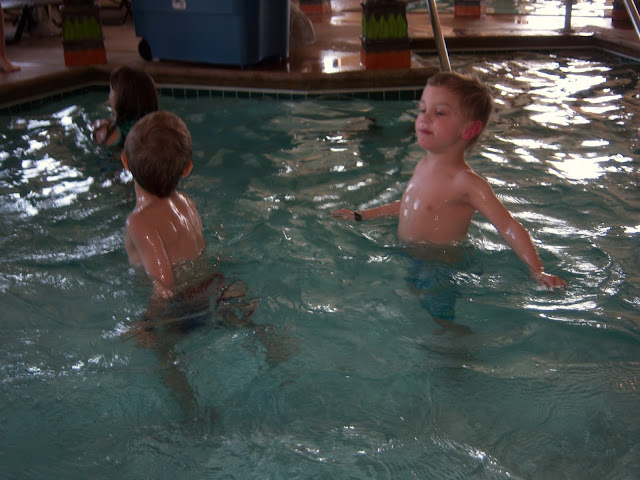 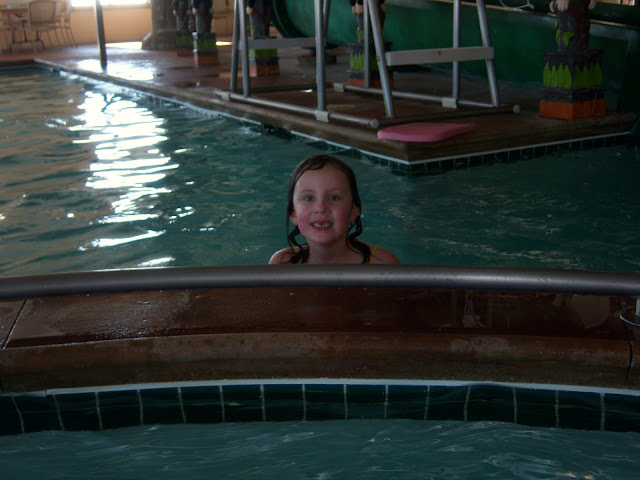 We very nearly had the place to ourselves for the first hour or so, it was marvelous!  When the kids had had enough swimming, we tag-teamed changing the boys back into dry clothes and then I took them out to the lobby while Mark and Aliza got dressed.  AJ kept threatening to run down the hallway - he'd take off then turn around to see if I was chasing him.  Zack just stood in the corner and jumped up and down, clapping his hands and going "EEEEEEEEEEE".  He did what you might call the autism dance.  A couple of men were talking a few seats away from us, and one of them left and then the one still there stared at Zack a bit.  I pretended not to notice.
Now you'd think that they'd be all tired out from the water and swimming and extra excitement and would just relax the rest of the day, wouldn't you.  But you'd be wrong.  They came home full of energy.  They bounced around the house, wailed in agony at the my choice in videos, dragged blankets off beds and around the house, knocked books off the bookshelf, and created general havoc.  We put them to bed as soon as we could.  Happy Birthday to Zack & AJ!
We didn't have cake or cupcakes.  I did that the first few years, but they don't eat it, and Mark, Aliza and I don't need it.  I'll get a cake when we celebrate their birthdays with the family, when there's more people around to eat it.
Tonight we took them out for dinner at Red Robin, another activity they don't necessarily love but we do anyway for a couple of reasons; 1, they need to learn how to behave at restaurants and eat restaurant food, and 2, we had coupons for two free burgers.  We ordered them a grilled cheese and chicken strips, and yet again they ate nothing.  We brought it all home so we can keep it in the fridge for a few days and throw it away around the end of this week.