No, I mean really lost it.  As in, none of us have any idea where it is.

I knew this was possible.  Every once in awhile, someone sends an email to the Fragile X email group, talking about how their son or daughter lost a tooth and it just disappeared.  Most likely he/she swallowed it.  And I'd always think, how can that happen?  How can your child have a wobbly tooth and you not know it?  I mean, remember when you were a kid and had a loose tooth?  Remember how difficult it made eating?  Remember how much fun it was to gross everyone out, wobbling it?  No?

Well I really didn't either, but Aliza has had loose teeth recently.  She got a big kick out of showing us how flexible a loose tooth can be, shoving it back and forth with her tongue as far as it could go, making us all nauseous.  And she turned total diva when she ate something.  Oh the pain, the agony!  You'd think that tooth was only attached by one or two exposed and strained nerves.

So how could Zack have a loose tooth, mouth everything constantly as if nothing was wrong, and then lose the tooth and be completely unaware of it?

Hyposensitivity.  It's the only logical answer.  He is less sensitive than the rest of us.  He doesn't cry much when he gets hurt. Bruises, scabs, and mosquito bites don't seem to bother him at all.  He hugs really really tight.  And he even gets some good stimulation from hurting himself a little bit; i.e., the head banging.

That's the only way he could have chewed on that butterfly toy all day long with a loose tooth, and not been irrirated by it.  And not even noticed when the tooth came right out.  I can only imagine that he was eating something, probably Honeycomb, and just swallowed it right down.  Either that or it came out when he was chewing on his butterfly and he may have just spat it out.

(I spent some time yesterday trying to get a picture of Zack's new gap, but even my DSLR isn't fast enough.  If he says "AJ" his mouth is open enough to see it, but he says it so fast....)

Aliza was very concerned about how the tooth fairy was going to be able to visit Zack and do her thing.  Briefly she wondered if she were the one to locate the missing tooth, perhaps she'd be the one honored with a tooth fairy visit.  I put an end to that fantasy right away, and wiped those dollar signs right out of her head.  I explained to her that the tooth fairy would still come for Zack.  She's a kind, compassionate fairy, who understands when kids lose their teeth sometimes and can't find them.  He'd still get money for his tooth.

So Aliza wrote a note, explaining the situation, and I wish I had taken a picture of it, but she'd already put it under his pillow.  Here's what she wrote:

Dear Tooth Fairy,
Zack swallowed his tooth.  He is sorry.  Please leave him a tip.

This morning she found a dollar under Zack's pillow.  She showed him, and he reached for it briefly before deciding Dora's Big Birthday Adventure was too exciting to be distracted.  Zack doesn't get the concept of money yet, so Aliza will help me pick out something he will like.

In other news, we had a couple more swimming outings!  We are soaking up the last of the summer freedom and sunshine with as much pool-time as we can fit into a weekend.

Zack chewed on his arm a lot in the water, until we got his butterfly for him.  He was a little tense.  He's not used to a sandy beach, it was a lot of new sensations for him to take in.

Warning -- I'm about to gush a little.  Is this the most gorgeous child or what?  My niece, Jocelyn:

Aliza's grandpa is a mostly-retired optometrist, but he came out of retirement briefly this weekend to check his granddaughter's eyes.  To her great delight, she was found to be a little near-sighted and is being fitted with purple Disney specs. 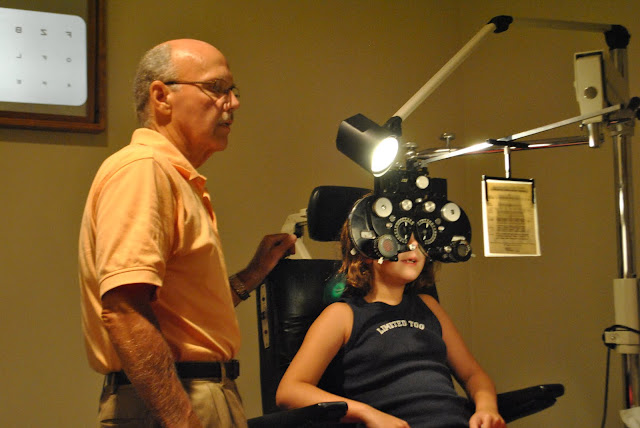 These are not the ones she picked.

I somehow missed getting a picture of her in her new frames, but doubtless I'll have plenty of pictures of her in them when they arrive.

I love, love, love the photos and the layout of this post. My favorite is your self-portrait - very clever.

That is so funny about the tooth. My don did that with about 4 or 5 of his teeth. I am pretty sure he swallowed them.

And oh he used to be so hyosensitive--but, now---oh wow--he can holler with just a minor bump.... go figure.

You are quite the photographer!

And I loved your post below about how to answer people's questions about your kids... I so understand!

How did you do the pink crocs photo, where only the crocs are pink and everything else is BW? Thinking of a second career in writing/photography? Very impressive. I'll have to ask you about that trick sometime.

Love the BW photo w/ the pink crocs. Gotta ask you about that one in person sometime.

My typical son just lost a tooth while eating a donut and must have swallowed it. Those front ones esp. are so tiny i think this happens a lot. I thought he'd be freaked out about swalling his tooth but after a fortunately brief discussion about pooping it out he was okay.