Water Games that Baffle Me 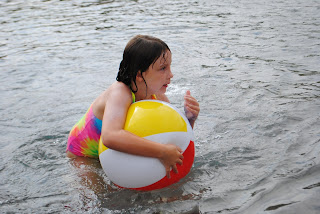 Today Aliza and I played a game in the swimming hole at the state park.  I had never played before, so she had to explain it all to me.

I was hesitant immediately when she told me it's called GIANT, and you guessed it -- I'm the giant.

So it consists of me chasing her and trying to catch her while she screams and swims away from me.  As I got close to her the first time she put her arms straight up in the air and yelled "T!  I call a T!"

What's a T?  Well apparently it means I can't touch her. Kind of like a time out, I guess.  Oooookay.

So I teased her, jumping around her and acting like I was going to touch her while she had her arms up in the air.  And she hollered "no puppy-guarding!"

I told her I'm going to need a written set of rules with a glossary if we are to play this game again.

I am confused as well. I will need a copy of the rules once you get them :)

Perhaps you'll find comfort in knowing that I have no clue, either.