I don't know if we're going to make it.

Zack screamed and cried for a bottle for a little over an hour and a half last night.  He wailed, he was hysterical.  Mark and I took turns dealing with him and he did drink from a regular cup for a little bit, but he was out of his mind with anxiety.  Around 8:30, a full hour and a half after nighttime-medicine time, it dawns on me that I forgot to give him his Clonidine.  I just .... forgot somehow, at 7 when I gave the boys their other medications.  Zack had wanted lots of applesauce and I figured he was thirsty and applesauce is kind of watery.  And I was beginning to worry about the fact that he hadn't peed since the middle of the afternoon.  Only about 3 hours, but I was starting to think about that. 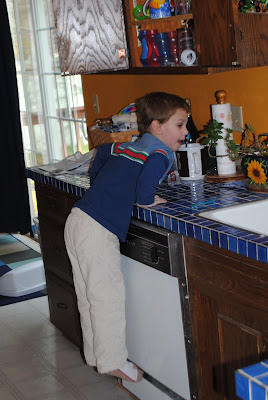 Earlier in the day we'd been to the Harvest Party at Aliza's school and the boys didn't do well there.  Like an idiot, I marched them right into the classroom full of 2nd graders, and I tried to get them to sit in a corner with me, but within a few seconds Zack pinched someone, and I told him "no,", and he screamed, and it was one of those screams where everyone stopped what they were doing and looked over at us.....and later Aliza told me that embarrassed her, when Zack screamed like that in her classroom and I felt bad about that......and we were all so exhausted when we got home.  There was a lot going on all day, it was chaotic, and apparently I lost my mind.
I felt so bad when I realized I'd forgotten the Clonidine, the one thing that really calms him.  No wonder he was such a mess.  Within 20 minutes of having it, he relaxed and stopped wailing, finally, and went to bed.  Just about an hour later than usual for him.
But this morning he was up before 5:30, asking for a bottle, and I woke up with a jackhammer pounding in my head.  Way too little sleep for him last night.  I anticipate a rough day.  There's no school today, no therapy, he's with us all day with no breaks.  I'm not sure we're going to make it without bottles today.

I have been in your situation a number of times now and trust me you can get thru it..I would be firm and tell them both no bottle BUT you can have a drink in your cup and if your a good boy and go the whole day with no bottles then tomorrow we will take you to do something..give him something --whatever floats his boat..maybe a coloring book and some colored pencils..play doh.. it is said it take 21 days to make a habit and 21 days to break a habit.. when my boys scream(beyound belief)I take them to there room close the door and let them scream ,I go back every 5 minutes and tell them if the keep it up they will stay in there longer but I will not put up with there screaming..it takes time and you have to listen to ALOT of screaming..but either way the screaming is going to happen but at the end of it you won;t have them on bottles and they will learn mummy means bussiness..My biggest screamer has learnt to moderfy his behaviour much better once he realized i wasn;t giving in.
Buy some ear plugs if it helps
Cheers Sonia

So sorry you're having to go through this. I know it's tough. Sticking with it IS going to be the key. I know it kills us as parents. I've learned through our journey that to endure the 'consequences' now (ie. screaming) will pay off because I know it's for his best in the future. You know your kids the best. They are resilient little things though. Love being able to be kept updated on this. Be sure you get lots of hugs!

Hang in there, honey. I'm praying for you today and sending you all the strength and magic I can muster.