The Toy that Wouldn't Go Away

I have tried to get rid of the Dora's Talking House several times.  I took it out of Aliza's room when she began using it as a stepstool to reach the top of her dresser.  I was going to sell it but the boys almost played with it.  And I had hopes they'd actually "play" with it - you know, appropriately, with Dora and her family and Boots and Mami and Papi and Abuela and the whole gang.  I even had Diego.  I had a Dora swingset, swimming pool, and van.  They did not play with it.

I put it away, and got it out again a few months later to get it ready to sell, and discovered it was missing the front door.  Come to think of it, the van's doors were missing too.  I can't sell a house or a van without doors.  I'd find one door, put it away somewhere, then find another door, and have no idea where I'd put the first one.  I couldn't manage to locate all the doors at the same time.  So Dora's Talking House got put away again.

I got it out this past week, intending to sell it in the Mothers of Multiples sale.  The van is long gone (not sold and profited from, but lost entirely), all the furniture and characters are gone also (ditto), but the house remains.  Empty, dusty, and a little dreary.  But the doorbell still rings, the radio still plays, and the table that folds out of the wall in the kitchen still says "It's time to eat.  Vamos a comer!"

I found the door.  I can't put it back on.  It hasn't just popped off, it's completely broken.  So, I guess Zack and AJ can keep their Dora house forever. 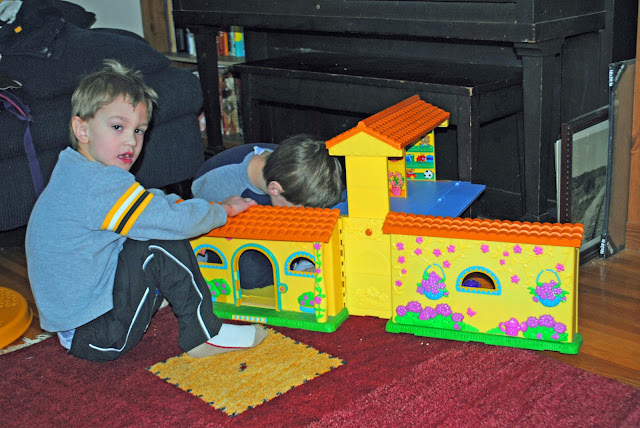 Oh, and AJ has lost 4 teeth now.  The score is 4 to 2.  This is the first thing AJ did faster than Zack.  Zack is usually quite a competitor, I'm sure he'll start knocking some teeth out soon.  Maybe that's how he'll spend his spring break this week. 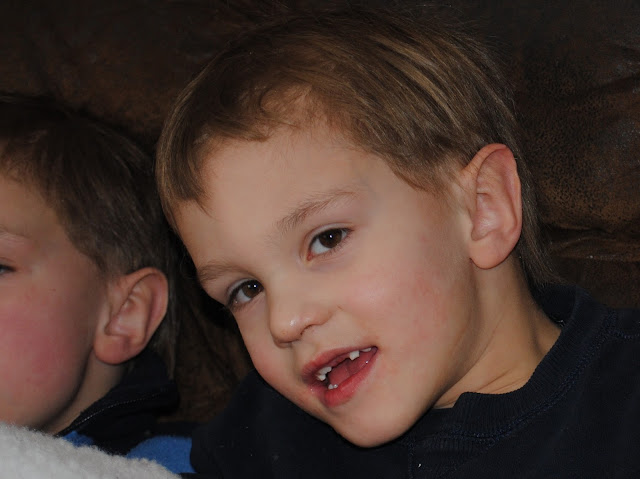