Got Multiples? With Fragile X or other Special Needs?

After talking to the Sertoma Club about Fragile X, my sweet friend Kim made a comment about how I should consider talking to my local Mothers of Multiples club. I loved the idea but thought, I'm not sure my topic (Fragile X) would be all that appropriate for the MOMs club......but Kim, you made me start thinking about multiples and special needs.

My mothers of multiples group currently has 590 total members. 28 of us are in the Special Kids, Special Needs subgroup. That's about one out of every 21. I've always felt like our Special Needs group was smaller than I would have expected.

I have always heard that disabilities and special needs in general are more common among multiples, simply because they are so often born premature, and the human womb was not created to hold more than one fetus. Multiple babies in the human womb create space and nutrient issues. That's why if you are carrying twins or more, you immediately get the status of "high risk" in your pregnancy. I started looking up to see what kind of information I could find on the World Wide Web about multiple birth children and statistically, what percentage of them tend to have disabilities.

(Of course, my twins' disability has nothing whatsoever to do with the fact that they are multiples. Fragile X is genetic, they got it because I am a carrier, and they both have it because they are identical. Their being twins is just a bonus.)

It's estimated that 1 in 110 children (1 in 80 boys) in the U.S. have an autism spectrum disorder. I believe in Minnesota that number is more like 1 in 70. I don't know why it would be higher here. I googled "autism rates in minnesota" and found this article from last January that indicates autism rates seem to be disproportionately high among the Somali population, at least in Minnesota.  I'm not sure what that might have to do with it.  I thought ASD was like Fragile X, in that it didn't discriminate.

And check this out, which I found on this blog. 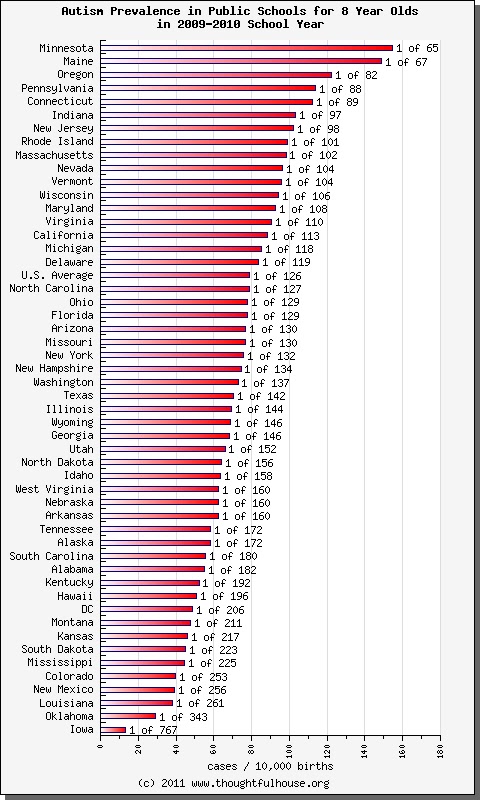 I wonder the same things that blogger wonders. Do they just not know how to diagnose it in the states that claim a lower rate of autism among children? Or, conversely, are we too ambitious about diagnosing it here in Minnesota? Do we REALLY have that many more kids with autism than the national average?

Anyway, getting back to my original subject, I found these statistics here.


That sounds like there's a pretty good chance that autism has a genetic component. Is anyone doing research on that?  Are there any studies being done on the rate of special needs among twins, triplets, and more?
Because I, for one, feel like there should be.  I feel sometimes like I live on an island.  I don't relate much to my friends in the Mothers of Multiples group.  The Fragile X group members come a lot closer to getting what our lives are like.  I don't want to sound like a whiner.  (Go ahead, say it -- I kind of do sound like a whiner.)  But from the first day the boys were diagnosed, I felt pretty alone, probably just like anyone else who gets a diagnosis they have never heard of.  My multiples group's special needs subgroup was really the first place I went to, and unfortunately it just isn't very active.  It seems those people have gotten the support they need elsewhere.

I found a few more special needs/multiples quotes and stats I thought were compelling:

At this site it claims "In terms of psychopathology, attention-deficit/ hyperactivity disorder is more frequent in twins and multiples than in the general population."

I wish it went into more detail about how it came to this conclusion, although it's not hard to believe.  The human neurological system is a labyrinth, and if one body is expected to create and sustain two or more new lives at a time, the chances of problems with that would increase, logically.  All it takes is one, tiny, crossed wire...

While doing this online investigation, I avoided reading anything that was more than three years old.  I didn't want to be citing something that is, in terms of autism research, ancient information.  But then I found this article called Raising Special Needs Multiples.

I love this article.  This is information that won't change.  If you have multiples with special needs you really ought to click on it and read it.


"Parents of special needs multiples often feel isolated, not fitting in with parents of healthy multiples in local twins clubs, but also not finding their needs fully met by groups of parents with disabled singletons."

I found this statement really gratifying, because it is what I've been striving to express, myself. I sometimes feel like I don't really fit in with the Multiples club, and sometimes my struggles are different from the Fragile X families I know, too. More and more I look for blogs and stories about families with twins with autism or even Fragile X, hoping I can identify more closely with them.

Another thing that falls under the category of "I Wish I'd Written That", is this part:


"If your children were born two or three months early, it might be quite awhile before they smile, hold their head up well, or roll over. This delay in development and social responsiveness is discouraging to many parents, especially if children require a lot of care and parents aren't getting much feedback in return."

My twins weren't born that early, but thanks to the Fragile X gene mutation, we definitely experienced the delay in development and social responsiveness. I didn't realize how much I needed those smiles and hugs from my babies. It feels petty and small and needy of me to say that I really needed that feedback from them and it was tough to provide the day-to-day care when all I got in return was screaming and crying.  But it's the truth.

I used to tell people that my maternity leave with the twins was like being at work, only a work where I had two bosses who screamed at me all the time and were never satisfied with the work I did.

Everybody knows that twins often have a special bond that they don't share with their siblings or even their parents. I think twins with special needs have a connection that's even more unique.  I don't know if our twins know it yet.  But I underestimate what they are able to understand quite often, so they might already be aware of how special they are to each other.

So if you have, or know of a family with a blog about special needs multiples, please comment here and let me know about it.  I'd love to start a list!

Hi im mrlissa i just heard of fragile x honestly ur not alone in feeling alone .. im having my 9 yr old tested asap...ive been thinking autism but everyone tells me no ... but its more then hyperactivity disorder ...hes got so many yics and almost every feature of fragile x ... im just excited to have a maybe so i can help him help himself my nuber is 218 296 0881 text if u wish to talk