Live from Chicago, starring the iPad!

I was going to be that super cool blogger who blogs from anywhere because I'm so totally mobile now, with my new iPad, but I couldn't figure out how to do it, so my techy-self-esteem imploded and I'm on my parents' computer instead.  I could get to Blogger and type up a post but nothing happened when I clicked "Publish", or "Save."  It didn't publish or save.  I don't know, maybe iPad isn't compatible with Blogger? 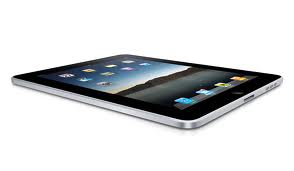 We did finally get the iPad, and the kids all love it.  And by kids I mean the three of them and me.  Mark hasn't had gotten too close to it yet, he hasn't been aggressive enough.  At the rate the other four of us are fighting over it, he's going to have to get tough or get used to waiting.  Aliza loves Angry Birds, Drawing Book, and the Real Piano HD; the boys love Super Why and PBS Kids;  I also love Angry Birds, but along with that, the Twitter and Facebook apps.  Yeah, my social networking apps get me through the day.

I downloaded a bunch of free apps for the boys, including ABA Flashcards Emotions, Animals, ABCs, and Actions.  They are only slightly interested in that.  I also got SeeTouchLearn, but I'm trying to figure out how to set it up with the cards it came with for free, before I buy any.

It is so wonderful to watch them play with it and love it, though.  AJ was putting puzzles together on it this afternoon.  Not baby puzzles with like 5 huge wooden pieces that fit in so obvious empty spots on a wooden board.  Big kid puzzles, with like 6 pieces.  Now I had to do the first couple of pieces, but he did most of it himself!

I have been told that iCommunicate is a good app, but I see it's $49.99, so I'm might get that for them and call it a Christmas present.  After someone can show it to me and convince me it'll be good.

We are in the midst of our second trip to Chicago for the STX209 trial.  We are going to be seasoned, experienced travellers before too much longer.  We have been swimming a lot and watching a ton of Little Einsteins.  I wish they'd make more of them, there are only like 45 different episodes and I've got them all memorized.

So what apps do your kids with autism love the best?  I need suggestions....