I love how everyone says "oh, I just LOVE Chicago" when I tell them we've been spending a lot of time there.

I guess to LOVE it, you have to see more than the traffic on the expressway, parking lots, hotel rooms, and the medical center.

You also probably have to not travel with two small children with autism.  It's hard to enjoy your trip when you are constantly hyper-aware of your two little ones and the dangers all around, that they are completely oblivious to.

The level of hyper-vigilance we have to have with the boys is stressful and exhausting in a way I don't think many people get.  I keep thinking about that family in California that was in the news a few weeks ago, whose 8-year-old autistic son was lost in the woods.  (I wrote about it here.)  He'd been in the care of a foster parent or something (who obviously didn't watch him closely enough and lost him), having been taken away from his parents because they'd tied him to a post in their front yard.  They did that because they found themselves facing foreclosure and having to move out of their house quickly, and they had no one to watch their son.

I think I know exactly what they were thinking.  That child required the contant, focused attention of one person, 24/7.  The person watching him could not also pack and move things out of the house.  One entire person had to be 100% watching him and doing nothing else.

They wanted to keep him in the yard, where he could watch them coming and going from the car, and where they could see him.  Where he wasn't secluded or isolated, but was safe.

Would it have been okay with Child Protective Services if they'd barricaded him in his bedroom, instead?

My boys require that same level of supervision.  I completely understand what would drive you to tie the child to something, just so you could have both hands free to do something else.  Let me tell you about the last time I thought about tying up one of the boys.

At the hotel we took the boys down to the lobby for the continental breakfast.  It wasn't that busy, but neither of them would sit.  My dad held onto AJ while I struggled to get Zack to stay at least next to our table.  He laid on the floor.  The breakfast was great - bagels, muffins, donuts, scrambled eggs, sausage, coffee, juice, and milk.  Some cereal.  The only thing there either boy might have eaten is the Fruit Loops, but under these stressful circumstances, in a strange place full of strangers, there was little hope of either of them eating anything.

But it's hard to eat when you never have more than one hand free.  AJ's decided he can sit, sort of, if he sits on my lap and I hold him there.  I can't butter my bagel.  Eggs keep falling off my fork because of AJ's struggling to get loose.  I have to time sips of coffee carefully to avoid sloshing it all over myself.

So maybe you can see why, in that hotel lobby, I briefly thought about how nice it would be if I could tie AJ to the chair next to me just for a few seconds, so I could let go of him and butter my bagel.

When we walk out to the car, I have to step up the supervision level because if I'm carrying things and maybe not holding both boys hands, they are just as likely to skip off in a different direction as they are to run toward the car.  Imagine walking out to your car in a crowded, busy parking lot with two 2-year-olds.  It would be nerve wracking, trying to keep them safe.  My two still have the unpredictability and impulsivity of 2-year-olds, only they are faster.

So maybe you can see why I breathe a little sigh of relief, when I can strap them both down in the carseats.  They can't get up and run off and I can look the other way without worrying about what they are doing. 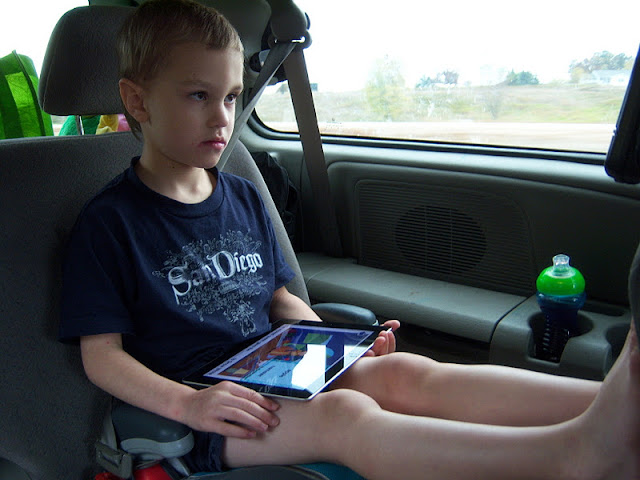 During the course of this last trip, AJ mouthed and chewed on things (his shirt, his blanket, a pillow) so much he'd developed sores on both sides of his mouth.  One side looks infected.  I put Carmex on his lips all weekend, but he's kind of a mess.  Zack has been rubbing the collar of his shirt across his bottom lip so much that it bled.


No, we are not seeing a reduction of the anxiety behaviors yet.

Driving is nice because I know the boys are safely belted in and can't get into too much trouble, but driving 8 hours is also quite a drain, so by the time we get back home, it takes a couple of days before I can even begin to think about planning the next trip to Chicago.  Maybe after this weekend, I can begin to think about it.

And maybe on the next trip. we'll try to see something besides the hotel and the medical center, and we might develop an appreciation of the sites in Chicago.  As of right now, though, I don't LOVE Chicago.  I don't even really like it.