We are starting our 11th week today.

These last four weeks are a weaning process.  If they have been on the medication and not the placebo, right now they are weaning off of the medication.

And darn it if I don't notice some regression in the behavior problems.

I'm so blind, so oblivious, so busy denying that there were any changes in their behaviors and saying I was pretty sure they were on the placebo -- I didn't even really notice how much less AJ has been biting me.  And how much less Zack has been biting and pinching other kids, and screaming.

Until it started up again.  Zack started screaming about something two days ago.  And it dawned on me ... it's been quite awhile since he screamed about something.  His "oh no, you're mad, I did something wrong, I'm so upset with myself, please don't be mad at me, I can't take this pressure!" scream.

And the clapping.  Zack does this thing where he gives you a pleading look and claps lightly.  His way of saying "I did good, right?  You're happy with me, right?  Please applaud me so I'll know I have your constant and undying approval."

He hasn't done that in so long, but the last couple of days - he keeps prompting me to clap for him.

When I try to hold AJ back from something, he leans over to bite me.  Or when I'm trying to change his clothes, and he thinks he has better things to be doing.

He chews on his sleeves.  Right up to the shoulder, he soaks it.  He also chews on his fingers.  Not all the time.  But it is a behavior that stopped for awhile, and then started up again. 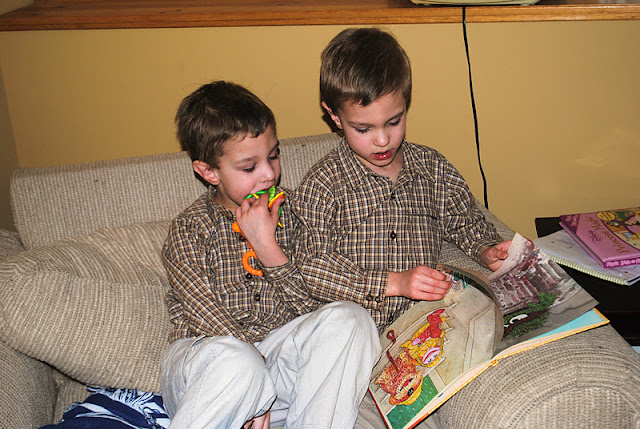 So again, there are probably 10 different things to which we could attribute the changes in their behavior.  The weather has changed in the last week -- it snowed and it is suddenly much cooler and drier.  Thanksgiving week was a drastic change from their routine.  We decorated for Christmas, which is probably stressful for them.

Or, it could be the reduction of the STX209.

In about a week and a half we go for our last trial appointment.  Then we'll start the extension - and we'll KNOW they are on the medication.  We'll start at a low dose and work our way up, but at least we'll KNOW.

12/6/2011 UPDATE:
Evidently I forgot to mention that we WON'T be finding out whether they were on the drug or on the placebo next week.  We won't know until the entire drug trial is over and it's approved by the FDA - which most likely will be sometime in 2014.  Then they'll tell us what each of the twins was getting during the trial..... I'm pretty unhappy about this.  I may have to write up some reflections of the drug trial, overall, to publish later.

2014! What?! So will you know howich they are getting on the extension? How long is the extension? Until 2014? Anyway, I really am glad to hear that you think there were improvements with the meds. Good news, right?