Our Trip to the MIND

I'm still going to do a post on our trip to Galveston, but first I'm going to do a quick update to let you know how the trip to the MIND Institute went.

And it was a super short trip.  But one of the boys, at least, has now experienced flying on an airplane.

We didn't leave until late in the day on Friday, so Friday doesn't even count as one of the days we were gone.  We left Sacramento Sunday morning before 7 AM, so Sunday doesn't count either.  We were really only there for one day.

We flew 3.5 hours there and back, so a total of 7 hours, so AJ could do the second half of the word learning research study (we did the first half 18 months ago) which took about 3 hours.  I worried for several minutes that he wasn't going to actually do the study at all.

But I'm getting ahead of myself a little here.

First, the airport.  AJ was doing really, really well until it was our turn to go through security.  There was no way he was going to walk through that big gray security gazebo by himself.  He whined and wiggled himself behind me.  It helps, sometimes, that my boys' disability is obvious.  So they said I could carry him through.  Whew, I thought.  That we can do.

Except that we walked though with AJ wrapped around me like a baby monkey, and he reached out with one hand and touched the side of the security tunnel.  We went back and tried it again and again, each time telling him he had to keep his hands down and not touch, but after 3 or 4 tries it became apparent that he was absolutely unable to keep his hands to himself.  He whined and whined, but I put him down and marched him in front me, holding his arms up over his head, so he couldn't touch anything.

We made it through security after only a few tries. 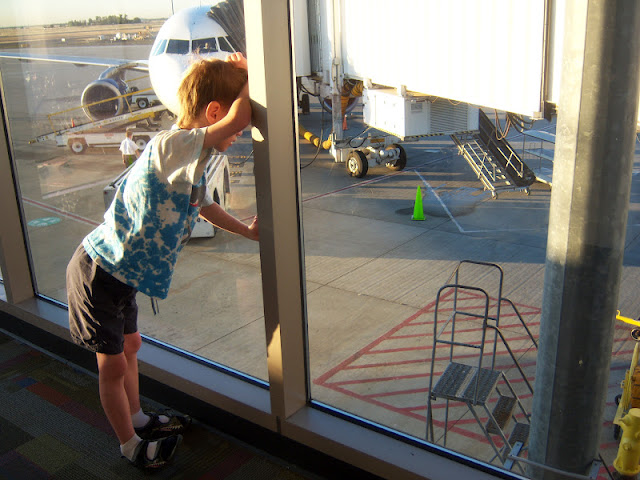 Then he wanted to walk around.  Like a lot of kids with Fragile X and autism, he'd just as soon you poke his eyes out as make him sit and wait for something.  So once we figured out where our gate was, we played on the moving walkways.  They were pretty fun.  Then he spotted the escalators near baggage claim, and we played there too, which was all well and good until he dashed through the automatic doors to the baggage area and we couldn't get back in.  Security, you know.

So we had to go back upstairs and through the front of the airport and wait in line to go through security - again.

This time he was seriously unhappy, but they remembered us and made it as painless as it could be, and AJ only cried a little bit.

I was worried about how he'd be on the plane.  What if I gave him the window seat, and he got scared?  What if he screamed and cried?

He didn't.  As we gained speed to take off into the air, he stared out the window and said "wheeeeee, here we go!"

He busied himself with the iPad quite well on the plane, but 3.5 hours is a long time to sit still, and he did ask me about a dozen times, "Hotel?"  I assured him, we were going to the hotel.

When we landed and he said "Hotel?"

And he looked out the window at the airport, pointed, and gleefully announced, "I see it, there it is!"

Saturday morning, bright and early at 9 AM (which felt like 11 AM to us), we walked the few blocks over to the MIND Institute.  I took a couple of pictures but AJ didn't want to let go of my hand much.  And it was already over 80 degrees and steamy, so we didn't want to linger outside all that bad. 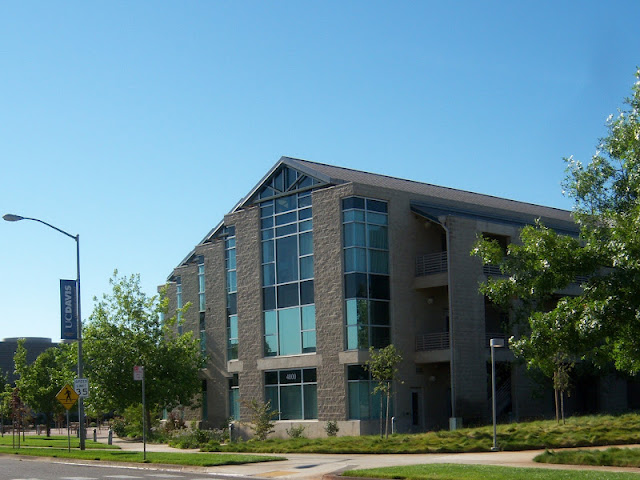 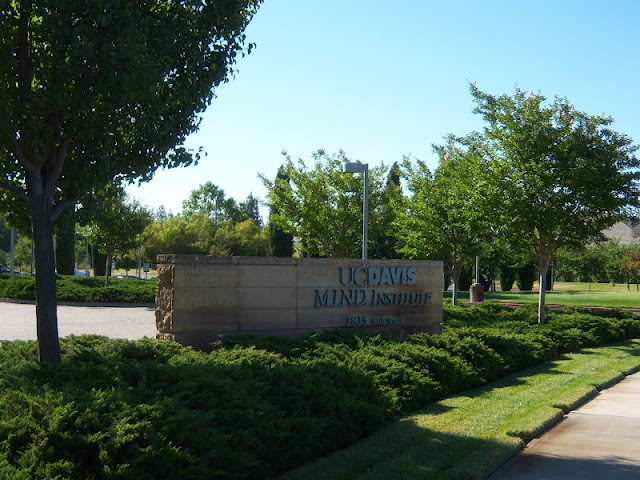 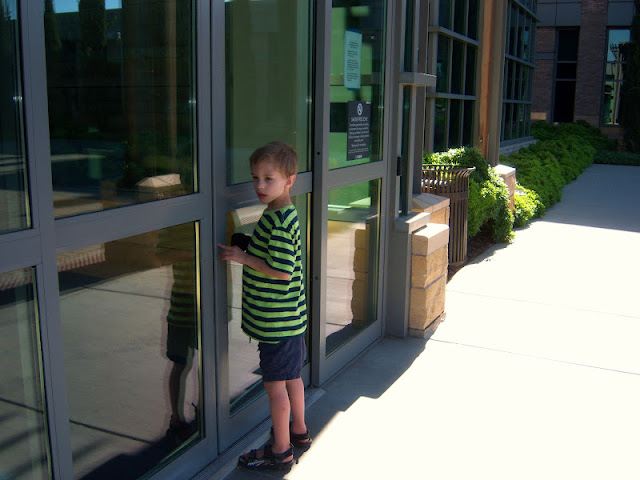 We got to the study room sat in our chairs, and got started.  The two study assistants and I talked in fake voices, feigning extreme enthusiasm and excitement, the way you do when you're trying to talk a small child into doing something that may not be fun for him.  I'm sure AJ saw right through us.

AJ sat at the table in the little study room and one of the assistants showed him a picture book.  There were four pictures on the page she turned to:  a dog, a car, a baby, and a tree.  She asked him "AJ, point to the dog."

And, nothing.  He sat there with his hands over his face, whining.

She repeated the request.  The other assistant tried it.  I tried it.  I got out all my props and bribes and over the course of about 15 minutes, we got him to sort of half-heartedly respond, once.

I thought of the money and time that had gone into bringing us here.  Yeesh.

And I left.  I went around the corner to the adjacent room, where I could watch AJ without him knowing I was watching him.

And wouldn't you know it, the little stinker began to do his work.  He responded to everything either of the study assistants asked of him.  With me in the room, he wouldn't move, but once I left, he was quite a performer.

It was really fun to watch.

After he finished his work, we went back to the hotel and went swimming, as I'd promised him (one of my many bribes to get him to cooperate).  I checked the temperature before we went out - 98 degrees at a little after noon. 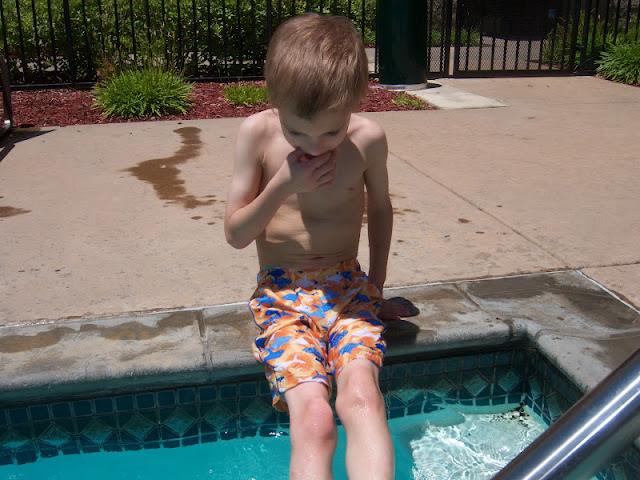 After swimming, we did a whole lot of sitting around the hotel room, playing on the iPad and watching TV.  Because it was over 100 degrees outside, we didn't have a car, and we were exhausted. 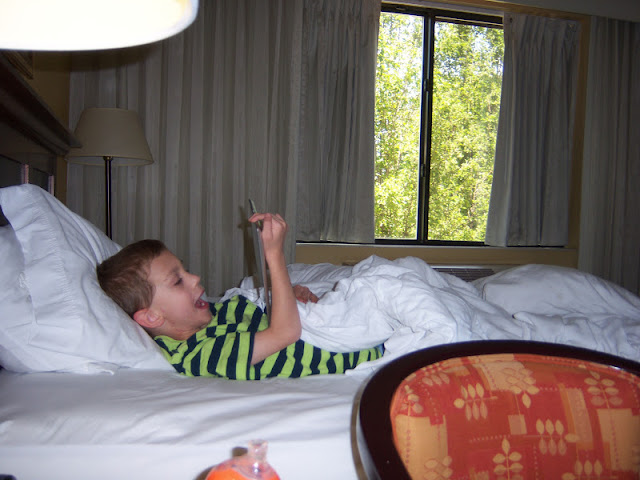 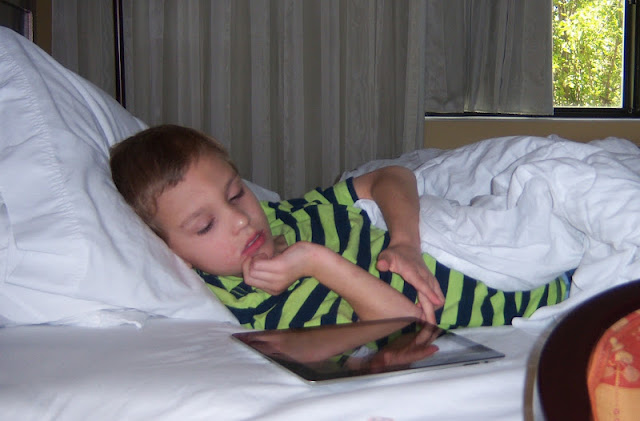 I had a great plan.  It went like this:  Minnesota time is two hours ahead of Sacramento time.  So at 3:00 in Sacramento, it was actually 5:00 for us at home -- dinnertime.  Since this was such a quick trip, I decided to pretend we were still on Minnesota time.  We had a light dinner around 3 PM, and then I was planning to give AJ his bedtime medications around 5 - to be on schedule with home, where we usually do it around 7.

But then my plan went awry when AJ took a nap.  He never naps.  I mean never.  When I told my dad that he took a nap in the middle of the afternoon, he said "He took a NAP?" in the same tone he would use if I'd told him AJ grew a third eye on his forehead.  This kid just doesn't nap in broad daylight.  Literally hasn't slept during the day since he was probably 2 years old.

Heck, these boys barely sleep at night.  Seeing him napping was almost as awe inspiring as his first words.

So I had to adjust our nighttime plan, but not too much.  Because after his nap he was pretty much ready to go right back to bed.  And since we had to get up at 3:30 AM to get ready for the shuttle to the airport (but that's only 5:30 Minnesota time, I kept telling myself), we crashed pretty early.

And that's pretty much it.  While last time we did this, I worried about separating the boys because they were so attached to each other.  This time, I think a few days apart did them good.  They have been all over each other lately, and AJ takes the brunt of the abuse.  Zack is bigger and stronger and has the advantage.  AJ asks for it, though, so you can't feel too bad for him.  Boys do wrestle, it's a pretty normal 7 year old activity, but my boys' sensory issues don't allow them to feel it when they get hurt - and so the two of them really beat the crap out of each other before somebody notices he's hurt and cries.  Just one of the many reasons they require such a high level of supervision!

Now I'll get to work on the Galveston pictures... I have a lot, and they are terrific!