I have things pop into my head daily that I'd like to write about.  Thoughts I'd like to pursue thoroughly.  But I just don't have the uninterrupted time.  So I'm going to touch a few of the dozen or so things I thought about writing about in the past week or so, here.

1.  Isn't it amazing how quickly after the Boston Marathon bombings that the suspects were identified and captured (or killed)?  5 days.  Impossible without modern social technology, I'm sure.  It was just one more example of how print media is going to be completely unable to keep up with news.  Magazines and newspapers are going to have to stick to human interest stories and avoid anything timely, because by the time they can print it and disperse it, it'll be history.

2.  And another thought about the Boston Marathon bombing - I couldn't help feeling special sympathy for those who were injured and will suffer lifelong disabilities.  I'm going to be daring and say, I felt more sympathy for them than even for the families of those who died.  Of course it's tragic to have your child's life cut short by something like this.  Something so completely avoidable and unnecessary.

The reason is because I think the media gives so much attention to the deceased, and not enough to the disabled.  The ones I really feel for are the ones who survived, whose lives will go on, but not at all in the way they had been living up until last Monday.  Those who lost limbs, or whose limbs won't work right even after they recover, and especially - those with brain injuries.  Those who might recover visibly, but whose minds will never work the same again.  I'm absolutely positive this comes from my personal experience raising children with brains that don't work right - but those are the people I feel the most strongly for.  And they get virtually no media attention.

Not that they want it.  Not that I think they should get it.  They probably don't.  But the way the media honors and dignifies those who died - I wish they'd show similar respect to those who will live differently, and probably with a lot more difficulty, now.  They are telling us what to think, by what they tell us - and I feel like (and feel free to disagree with me, but like I said, I know this comes directly from my experience with my kids) they are telling us that those who died and their families suffered the most - they are at the top of the suffering pile - and anyone who survived should just be grateful they survived and they aren't at the top of that pile.  And I'm sure they, and their families, are grateful.  But I can't help but feel for the mothers of the people whose bodies and brains were permanently broken, and who will live, but with challenges and trials they never dreamed they'd encounter, and that will never get the attention of any news media outlet.

That's enough of that.  Please don't send me hate comments for not respecting the dead.  I do respect them, and their families.  I just wish there was more respect and sympathy, and lasting sympathy, for the life changing injuries, and less of a "they are just fine because they survived" attitude.

I don't know if I explained that well and I'm not going to review it before sending this out, so please try to understand that I'm not trying to minimize the pain of those who lost children.

3.  We just returned from a trip to Chicago for an Arbaclofen, STX209 drug trial.  Here's a cute but blurry iPhone photo of the boys in the car on the way home yesterday. 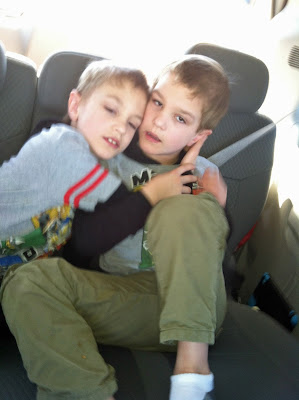 The trip was as uneventful as you'd want a roadtrip to be.  A little bit of weather to deal with but mostly we left a spring snowstorm behind in the Twin Cities, and we arrived in Chicago just as the rain and flooding were starting to dry up.  It wasn't pretty, but it wasn't terrible.

It was a little alarming to hear about how the company sponsoring the drug trial is having money issues, and there is a possibility this trial will end, without being approved by the FDA.  Hopefully if they have to cancel trials, they'll cancel some other drug trial that isn't as close to being completed as this one.  Phase 3 of this trial (the one the boys participated in) ends in June, and then it's just a matter of paperwork and business stuff, and it could be approved and on the market by spring of 2014.  If they can keep it going.  We haven't been reimbursed for the trip we took in January yet, and now we just added another one to their bill.

I'd hate for us to stop having to take the medicine, and I'd hate for all our travels and all those blood tests and urine samples and stress to have been for nothing.  I'd hate for this medication to be delayed in getting to other people with Fragile X.

4.  We had talked about going to Canton, IL after our appointment on Friday to attend the 10th Annual Walk for Fragile X put on by Holly Roos, but we couldn't work out the travel and hotel details in a way we thought would work for the boys.  We are a little high-maintenance, and while AJ and Zack have become really excellent little travelers, there are still certain things that need to be in place for it to work.  And it ended up being a puzzle I just couldn't complete.

There's also the fact that after a drive to Chicago and an appointment at Rush, we are all pretty beat.  What they needed after that was rest, not more anxiety-inducing activities.  I shouldn't have tried to combine the trips.  If we could have made Canton it's own trip, all by itself, it would have worked better.

I have seen all the pictures online from the Walk and the gatherings before and after, and while it looks so fun, it also looks impossible.  I could have gotten Zack through some of that, but he would never have tolerated the amount of socializing I see the other Fragile X kids participating in.  AJ could have done it, but he'd have been outrageously stressed out.  I don't know how they all did it.